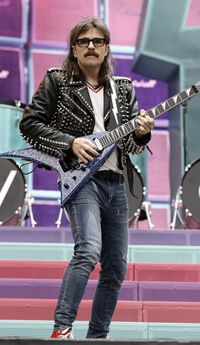 WASHINGTON, D.C. -- After the success of the Hella Mega Tour, President Joe Biden has promoted Weezer frontman Rivers Cuomo to Oceans Cuomo. This comes after the American President revealed his plan for a "knighting system" like that of the United Kingdom. However, due to copyright by The Queen, instead of 'promoting' famous Americans to 'Sir' or 'Dame', he would instead "improve" their names. Rivers, now Oceans, Cuomo is the third person to be given this honor following Dude Fieri (formerly Guy Fieri) and Meat Sheep (Meryl Streep).

Despite Weezer's influence since the 90s, and songs of theirs featured on the soundtracks of Pixar's Cars 2 and Disney's Frozen 2, many have objected to Joe Biden promoting Rivers due to the allegations that arose in late 1995 when it was speculated that he kidnapped a girl. Although Rivers managed to clear his name in 1996 before the release of their second album Pinkerton, many still don't like him. Along with the people opposed to Rivers in general, are the Climate Change Activists who believe by giving Rivers a bigger body of water to control, he would contaminate most of the Earth's drinking water supply by washing his mullet and moustache in it.

Later this week, Deadpool actor and self-proclaimed "free guy" Ryan Reynolds will be promoted to 'Bryan Reynolds' as he is a B-list actor (although he isn't even American).

This article features first-hand journalism by an UnNews correspondent.
Retrieved from "http://en.uncyclopedia.co/w/index.php?title=UnNews:Weezer%27s_Rivers_Cuomo_gets_promoted&oldid=6140314"
Categories: