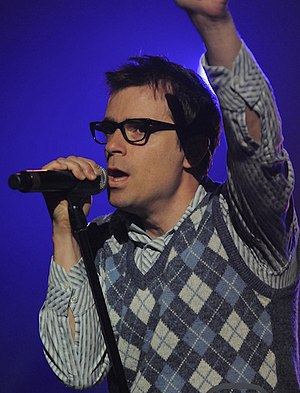 Cuomo takes over the music industry.

The Internet, EARTH -- Instead of following in the steps of Neil Young or Joni Mitchell, rock band Weezer's frontman; Rivers Cuomo, launches his own Spotify parody, Weezify.

Aiming to be the Wikipedia to Uncyclopedia, Cuomo launches a music platform that does the exact same thing as its rival Spotify, except it only plays music from the Weezer discography. After the heavy backlash Spotify has received the past week with "famous" musicians Neil Young and Joni Mitchell pulling their music off the platform, Cuomo adds even more pressure on the green music streaming giant by making a site that will only be visited by the 10 million or so Weezer fans on the planet. Despite having a platform for only Weezer songs, Rivers has allowed Spotify to continue holding both Weezers' catalogue, as well as his own solo material that includes a Dr. Seuss Netflix song. Leaving his work on Spotify suggests that he probably alligns with the COVID misinformation by Joe Rogan, or he just wants to keep a stable source of income.

As of right now, Weezify has an estimated use of 30 - 45 persons, with a million more well on the way. Weezer fans have celebrated the launch of a platform just for them, with some going as far enough to lose their virginity for the second time. Paul McCartney has stated to UnNews that he is thinking about making his own music streaming site for Beatles songs called Beatify (pronounced Beat-your wife) — both Cynthia Lennon and Yoko Ono have stated that this is not a dig at former Beatle, John Lennon (only former cause the blokes dead).