UnNews:Vietnam to Change Name of Currency 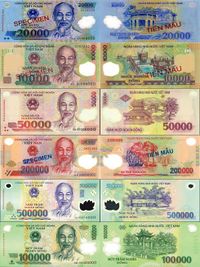 SAIGON, Vietnam -- The Americans spend their Dollar. The Britians buy with the Pound. Mexicans employ the Peso, Russians save the Ruble, and Germans parlay the Mark.

Vietnamese use the Dong, and they're not happy about it.

The history of the Dong stems back to 1978 when the State Bank of Vietnam adopted the name from North Vietnam. North Vietnam originally under French-Indochina rule changed the name as well as the value to reflect their new independence. The 'Dong' was felt to be liberating, despite snickers and objections from French bankers. In 1985 the Dong was reevalated. At that time Dong wasn't worth as much, trading at a 1000:1 ratio. Officials, realizing they had too many Dongs floating around, performed a Dong removal and pumped up all the leftover Dongs. Another Dongectomy was performed in 1987 resulting in a 10:1 Dong load.

Although Dongs have been made in gold, silver, copper, and brass, aluminum Dongs were the Dong of choice. However, Dong inflation began and soon the country was left with no choice but to begin using paper Dongs. The Vietnamese couldn't mint their own Dongs so the bank of Finland stepped up to the plate and now all Dongs are Finnish. 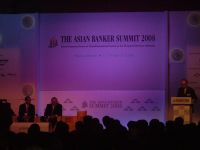 Vietnamese Bankers discussing the fate of their Dongs.

Dongs come in a variety of colors. There are brown dongs, white dongs, red dongs and black dongs. There are rainbow colored dongs and yellow dongs. Dongs are durable and fit into one's pocket or wallet easily. The Fins minted the Dongs on extremely high grade paper which means that the Dongs stay good for a long time. If there's one thing the Vietnamese are proud of, it's the widespread circulation of their Dongs, thus making the transition to a Dong-less society even more challenging.

The old word for Dong is "xu". A very handy thing to know if you play Scrabble.