The Prince of Darkness — the ultimate purveyor of all things wicked, vile, and malevolent — has personally reviewed this article. The submitter and all subsequent editors are damned to eternal torment in hellfire
Considering selling your soul to the Devil? For great rates call 1-800-666-EVIL. 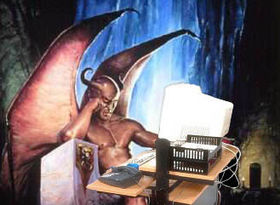 Unable to take the heat any longer?

HELL -- He might put on a strong front when it comes to maintaining his reputation as ruler of all evil, but the empty bottle of Prozac labeled: "Satan, 8 pills 4 times a day after meals" found at the gates of hell by Jesus on his previous business trip has left many divine individuals baffled, suspicious and slightly paranoid in response to Satan's sudden, neurotic behavior.

"I went to see Satan in order to settle a claim with him over Michael's soul," said a concerned looking Jesus when interviewed by UnNews. "I could tell by the look on his face that something other than having a black robotic spider which leaks oil and smells like a hag’s backside for a heart was bothering him, because I'm sure I spotted the tiniest hint of a tear drop when I asked him to sign the contract giving all soul rights to God."

According to Jesus, Satan threw quite a tantrum when he was told that God would be taking the recently deceased, Pop King's soul to heaven, saying that Satan responded by shouting, "It's not fair! He always gets the good ones!"

"I tried to draw his attention to the fact that he got to keep Elvis's soul which was a big loss for God back then. You know how much my dad loves his rock. I don't understand it sometimes. Why can't everyone just enjoy trance music like me?" Jesus continued to say, while UnNews staff members tried their best to dim the extremely bright light surrounding him through the use of ineffective blinds and reflectors. 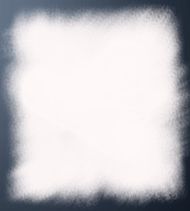 A photo of Jesus being interviewed. We really tried.

Although Satan denies all allegations, a recent blog entry discovered on the internet under the username; Santa_Spoonerism, confirms that Satan is currently going through internal conflicts. The username alone suggests that he is trying to hide the facts, but bloggers are not fooled.

It also appears that Satan is not very technologically advanced after he poured his heart out on the blog without realizing that millions of people would be able to read it. In his blog he revealed details such as his affinity for Pop Music, labeling his favorite song as "Pop Musik by M." UnNews is unable to reveal further details in fear of more PC's catching fire from spontaneous, unexplained combustion, however the main concern at hand is the possibility that Satan might be retiring, after his blog revealed details of his consideration to move to planet Mercury and settle there.

The question that is being asked most frequently is, "Who will the new ruler of hell be if Satan does decide to retire?" That question will unfortunately remain unanswered after Satan's confirmed realization that internet users are able to read blogs resulting in an increase in house fires and exorcisms. Only time will tell.