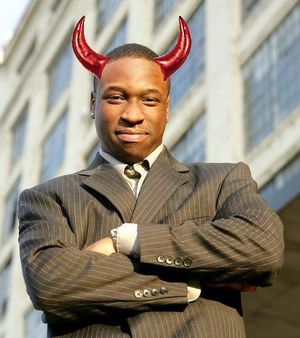 Could software engineer Mike MacFistowe really have been the Devil? Christians Kenny K. King and Clarissa Godbotharar certainly think so.

WISCONSIN, USA -- Employees at a prestigious software engineering firm in Addison got more than they bargained for when they decided to search the internet for details on a mysterious co-worker named Mike MacFistowe recently. "He immediately struck everyone as different to us," says in-house technical writer Kenny K. King, "he started here about three months back and he never fitted in. He made people nervous."

In fact, many of the staff found that they felt distinctly uneasy whenever Mike was around. "Most of the females working here actually found him very frightening," Kenny - who describes himself as a practising Christian - adds, "though they couldn't quite say what it was about him. He didn't stare at them or anything like that and he kept his distance from them - he kept his distance from everyone, truth be told - in fact, if it wasn't for the fact that there was just something weird about the guy you'd have said he was respectable."

Clarissa Godbotharar, who is also a Christian, takes up the story: "I think I was affected by him most of all - he made me shudder. A few of the other women and myself approached the human resources department and demanded to be informed if he had any kind of a criminal record, because we wondered if he might be dangerous in any way and he looked like the type. They assured us he wasn't, but one of them swore us to secrecy and admitted that they found him scary too."

Intrigued by their strange colleague, Clarissa and Kenny began to root out any information on him they could find. "We talked to him a few times, just to get an angle on the guy," Clarissa says. "None of us liked doing that, especially not the women because he seemed to emanate a weird, perverted sexual aura that made us feel things no decent God-fearing woman should ever feel. Even though he never did anything aggressive there was a real threatening air about him. Whenever he walked into the room, you'd see people suddenly stiffen up, like it'd suddenly gotten colder. He made us nervous - it was like he always just about to commit some Godawful act." 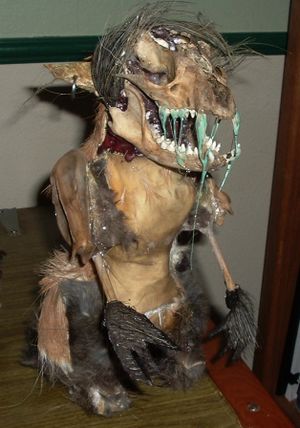 Satanic beasts from Hell? Rats like this one were found in the building.

Before long, strange things started to happen in the office. First of all, the premises had to close for a day after rodents were discovered living in the false ceilings, meaning that the company - already struggling to maintain profits in the current economic climate - lost an entire day's business. "That set back the project we're working on - a single day might not seem too bad, but we were close to the deadline and now we're probably gonna over-run that," says Kenny, "That's gonna cost us because the client is going to expect a reduction in the product's cost. Thing is, though, when we saw what the pest control guys gassed up in that ceiling, we were glad of it. I ain't never seen no rats like those suckers." Other strange things happened too - for example, when the water in the office water cooler began to take on a red hue, the supplier tested it to see if it had become contaminated by some sort of bacteria or algae - they discovered that it had in fact somehow changed into human blood.

"Things we just couldn't explain were happening all over the place," says Clarissa, "the phones would start ringing and when you picked it up, all you'd hear was this horrific, screeching voice like someone being tortured. We thought at first it was a fault and we were being connected to somewhere where they played a lot of Céline Dion CDs as background music, but one of the guys here is into horror films and he recognised some of the words as being the same ones spoken by the possessed girl in The Exorcist. It was real uncanny." Next, the photocopier machine started to act strangely. "You'd put whatever it was you wanted to make a copy of in the machine," she told us, "but you wouldn't get a copy. At first, it was just printing out black pieces of paper so we thought it had developed a fault and e-mailed the maintenance department. But then we noticed that in some of them, you could images of some sort of landscape. We scanned a few and enlarged them and could plainly see pictures of what appeared to be tormented souls being roasted by demons over flaming pits of fire. They were horrible - reminded me of the CD covers some of those awful sick heavy metal bands go in for."

Of course, nobody could prove that MacFistowe was the cause of or reason for these scary occurrences, but everyone agreed it seemed very strange that none of it happened before he started working in the building. Things started to go missing, too, and everybody agreed MacFistowe had been acting in a suspicious way. "I don't what it was, but he just looked like a thief to me," says programmer Eugene Ickse. 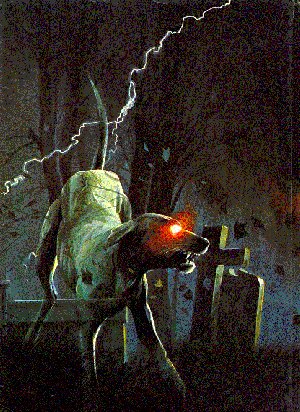 A satanic black dog was seen several times in the company carpark. In this artist's impression, the artist has included some gravestones and stuff to make it look spookier, because she's a goth who hopes to one day produce album art for rock bands.

Soon after, a few of the colleagues reported that they had experienced visions of a spectral black dog hanging around the delivery entrance, which is commonly frequented by those employees who smoke. The dog was said to resemble a Great Dane, only it was much larger - about the size of a cow, says one employee who wishes to remain un-named for fear of ridicule - with a single, glowing red eye. "I never saw anything like it before," he says, "and I pray I never will again." Further suspicions were raised when MacFistowe, a smoker, was seen on the firm's CCTV security cameras as he petted the devil dog. Company security chief Eamonn O'Leary says he'd seen the dog several times while monitoring people entering and leaving the building. "That damn thing was huge," he says, "I wouldn't have gone anywhere near it and I'm a big guy. But man, that MacFistowe dude had it eating out of his hand. I swear I saw it lick his hand and roll over like a little puppy-dog." Aware that Clarissa and Kenny had concerns over their new colleague, he mentioned it to them and allowed them to view the tape.

"Seeing him pet the dog like that was the last straw," says Kenny. "I said to Clarissa, there's something mighty strange about this guy and I'm beginning to suspect I know what it is. So we decided we'd Google him, see what came up." However, Google was not forthcoming - there was no information about MacFistowe online, which they claim also struck them as strange since Google knows all. But then, Clarissa struck gold - "Like a lot of techy people, I'm not too hot on spelling," she told UnNews. "I can write code and I can multiply any two numbers you care to think up in my head, but I'm the first to admit my spelling is a little poor. What happened was after Googling MacFistowe, I decided to check out Wikipedia to see if they had anything on him but I spelled the name wrong - I typed in Mephisto. And right there on my monitor I read the words "Mephisto or Mephistopheles is one of the chief demons of European literary tradition," and it all clicked into place. I realised what we were dealing with here - a devil."

Further research led the pair to conclude that Mike MacPhisto was, in fact, Satan himself. "Once we knew about his real name, all the stuff with the photocopier, the water and the weird rats fitted into place," explains Kenny, "all this time, we'd been working alongside the embodiment of Evil. It sends icicles up my spine just to think about it. I mean, I've stood next to that guy in the men's room, anything could have happened, and he'd been working alongside honest Christian women - it doesn't bear thinking about." They prepared a file on him, listing the strange happenings since he began working for the firm, along with statements from colleagues concerning how uncomfortable he made them feel, and presented it to the boss, CEO Dwight Power. "When I looked at what they'd discovered, I knew we had to get shot of the guy," Mr. Power said. "I mean, who who can tell what a guy like that is gonna do? My employees were at risk so he was fired. I've now launched an enquiry to find out who took this guy on, and you can rest assured that as soon as I know, they'll be fired too."

The Ten Worst Places To Be Black