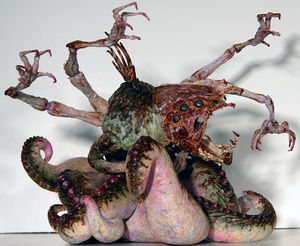 VERACRUZ, Mexico -- For decades, tales of attacks on animals and small children by the chupacabra have been a staple of the Mexican bedtime story. Thanks to the Chupacabra Eradication Program begun by President Vicente Fox in 1995, these creatures of the night have all but disappeared, rendering these stories fairy tales. But recent discoveries of brutally slaughtered small animals and missing children have revived belief in the legendary monster.

Late last evening, shots rang out in normally serene suburban Veracruz, Mexico. Angry men with torches, guns, pitchforks, and flashlights combed area hills and arroyos [1], in search of a mysterious predator which had been littering the countryside with the savaged carcasses of small livestock, cats, and dogs.

Cries of, "El Chupacabra" rang out in the darkness, as small groups converged on the back yard of prominent local doctor Salvia Cantánquera. In the low flickering, a shambling, horrible shape shuffled about, gnashing the teeth in its many maws, screeching and hissing.

However, this was no ordinary chupacabra this posse had found, writhing and spitting in a jacuzzi. This thing was, by all appearances, from another world. Tentacles and questionable appendages flailed about, all attached to a squat, greenish-brown trunk, and its mouths and eye stalks originated at various and unlikely places.

The horror that came from the blackness last night was identified by biologist Arne Cavalcade of University of Munching, Germany as a marine chupacabra. "This little bugger is the result of man's tampering with the DNA of chupacabras and starfish," said Professor Cavalcade. President Felipe Calderón said, "We can eradicate these monsters by seeding our coasts with red tide algae, or maybe by radiation." By contrast, the Institutional Revolutionary Party, which ruled Mexico for seventy years, urges preservation of the fellow bloodsucker, the marine chupacabra perhaps taking the place of the rattlesnake on the national flag.