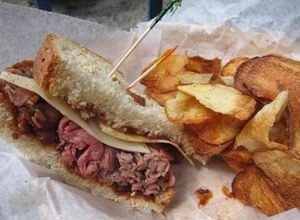 Although there may be a correlation between this delectable meal and my itchy balls, causation is highly unlikely.

HUBERTUS, Wisconsin -- Amidst various events continuing to progress worldwide, it has been found that my balls itch. This was discovered by me today around 1:40 PM shortly after I finished a lunch of roast beef sandwich with a bag of salt and vinegar potato chips. The foods consumed for lunch are believed to be unrelated to the current itchiness afflicting my balls.

Although this is not the first time I've experienced this sensation, various new factors are being brought to question now. Initial investigations point to it being caused by the fabric of my boxer shorts, which my girlfriend bought for me at the duty-free shop in Saipan last week. However, some sources indicate it is a side effect of my deep-rooted insecurity from always being picked last for dodgeball as a child. The possibility of it being an indirect message from God has been deemed highly unlikely, although not yet thoroughly explored. All that is known for certain at this juncture is that my sack requires a good scratching.

Prominent dermatologists state that itchiness is a sensory experience common among all human beings on various parts of the body. My balls and I agree that at we are currently no exception. No information has yet been found in scientific journals on the consequences of leaving the situation alone for prolonged periods of time. However, the general public will concur with me that my balls don’t deserve such neglect.

When approached for opinion on the subject, local auto repair serviceman, “Mitch” of Babcock Auto Spring Co. replied, “Get out of my garage, you freakin’ queer!” Similar responses were gathered from those in attendance at a Little League baseball game being played across the street from my house. The Dali Lama could not be reached for comment.

Featured Article  (read another featured article)
Featured version: 3 December 2014
This article has been featured on the front page. — You can nominate your favourite articles at Uncyclopedia:VFH.