UnNews:Morgan Freeman to play Bilbo Baggins in "The Hobbit" 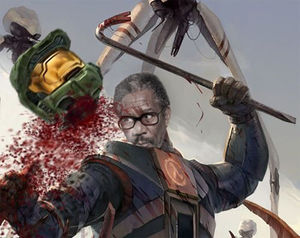 The announcement came as a surprise and a disappointment to many Tolkien fans. "Zis is a mistake. Bilbo is not black. I sink it shows a big misunderstanding of Tolkien's message. I mean, Gandalf ze White is triumphant over zee evil elephant-riding Black men, you know?" German fan Adolf Hitler said. "I will not go see zat movie", he adds. "Unless Bilbo's wife is Natalie Portman".

However, Tolkien expert Lady Gaga said that it is nowhere stated that Bilbo was white and did not wear a moustache. Indeed, on Page 301 of The Silmarillion, the epic that fleshes out "Middle Earth," Tolkien describes not just the hirsutism of the little creatures but their awkwardness with soup. Ms. Gaga explains, "This suggests the presence of mustaches, unless they eat soup with their feet." Moreover, Irish historian Sean Connery explains that, contrary to popular belief, Bilbo was not actually living in Ireland, which suggest he may have had black friends. Actually, he may have been black himself (the prefered nomenclature being African-Hobbitsian).

Peter Jackson is himself African-American, which very few people remember, much like his brother Michael. His decision was the result of a long social introspection: "I didn't have anyone short enough for the role. But I like Morgan Freeman, so I gave it to him."