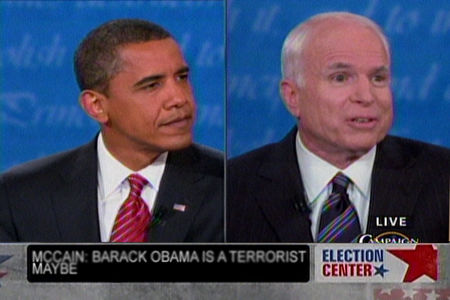 McCain's blinking was deciphered in real-time on CNN.

NEW YORK, New York -- The final debate was held last night, 15 October 2008, at Hoffstra University in New York City. Analysts and audience members had expected an uneventful, run-of-the-mill debate much like the last two. Senator McCain (R-AZ) surprised the expectation-setters in many ways, however; he looked Senator Obama (D-IL) straight in the eye whereas in the prior debates he had not, he started strong with attacks and several concrete policy proposals, and he spoke directly to an unexpected new symbol of the middle class, a gentleman plumber whom McCain may or may not be having an affair with.

Least expected of all, though, was McCain's grasp of Morse code.

"It's really quite amazing," Professor Bob White told UnNews. "When I heard he blinked 3,000 times, I didn't know what that meant. I thought maybe he was just a chronic liar, you know, like Logic Magazine had asserted recently. But after doing some research, I discovered he was communicating in Morse code even while he spoke aloud to Senator Obama and Mr. Schieffer."

Indeed, Sen McCain's chronic blinking problem had been striking a chord lately with voters, with 99% of recipients in a recent UnNews poll declaring that they thought is was "shifty". Analysts and media members have now come to the general conclusion, however, that for the whole time the Arizona senator was simply delivering a secret message to listeners.

UnNews managed to decipher some of the code from last night's debate. For example, even as McCain greeted Obama with the words, "It's great to see you. Great to see you", he blinked rapidly, communicating to his audience, "There's a black man shaking my hand. This is worse than 'Nam."

And while McCain came to his running mate's defense when asked whether she was qualified to be President if need be, his blinks said, She's got a pussy; isn't that enough?

UnNews is hard at work deciphering the rest of McCain's complex Morse code messages. More will be made public when available.

McCain:...When Senator Obama was first asked, he said, "any place, any time," the way Barry Goldwater and Jack Kennedy agreed to do, before the intervention of the tragedy at Dallas. So I think the tone of this campaign could have been very different.
Morse Code: Kennedy deserved to get shot because he was a liberal.

McCain: Well, if you'll turn on the television, as I -- I watched the Arizona Cardinals defeat the Dallas Cowboys on Sunday.
Morse Code: I just figured out how to work my television remote.

McCain: Let me just say categorically I'm proud of the people that come to our rallies. Whenever you get a large rally of 10,000, 15,000, 20,000 people, you're going to have some fringe peoples. You know that. And I've -- and we've always said that that's not appropriate.
Morse Code: Don't worry, I know the real fringe peoples at the rally are the blacks and the Arabs.

McCain: Well, you know, I admire so much Senator Obama's eloquence.
Morse Code: Obama reminds me of the time daughter showed me the Soulja Boy video.

McCain: Well, it is a terribly painful situation for Americans. They're seeing their premiums, their co-pays go up. Forty-seven million Americans are without health insurance in America today.
Morse Code: The Negroes, Arabs, and Asians don't deserve health insurance.

McCain: Senator Obama wants government to do the job. I want you, Joe, to do the job.
Morse Code: Get him with a Glock. Taste of his own medicine.