'Glenn Beck loses sponsors and goes even more insane if that were possible.' 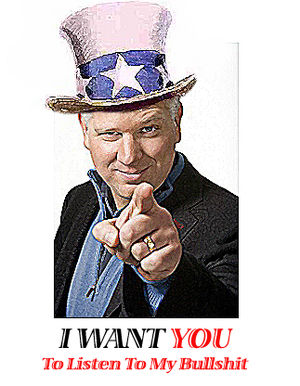 Uncle Beck wants you to listen to his bullshit.

Glenn Beck goes even more insane if that were possible. Claiming that Barrack Obama is starting up his own civilian army of secret police and thought police to take over the USA and implement social justice.

Well it cost Glenn Beck most of his sponsors except for Newsmax, The American Spectator, the authors of the book "Shadow Government" and other ultra-right-wing corporations that are in the pocket of the Neocons and Republican Party.

"Obama is a Communist and Liberal Fascist that will not only pull the plug on Grandma by canceling her Medicare part D benefits, but also will use his thug army to take away jobs and give them to the disadvantaged. Obama has an army of Czars that answer only to him as well that are generals in his civilian army." Glenn Beck said on his show. The Liberal Blogs were shocked and their heads exploded, "How come Glenn Beck didn't attack the Bush administration in the same way?" posted Hefty Lardbutt liberal blogger. "I did attack the Bush administration as well," claimed Glenn Beck, "just that it was on CNN Headline news, and hardly anyone watches that, and it was offair when I made those comments, honest."

Since joining Fox News Beck's ratings went through the roof, but his controversial comments cost him a lot of sponsors. Beck had to beg for donations from Bill O'Reilly, Rush Limbaugh and even Darth Vader (Who is a Sith not a Neocon, but their goals are still the same.) in exchange for Beck's show to air commercials for them on his show.

"Obama is selling us out to China!' claims Beck. "We are on the road to Socialism/Communism/Fascism, all three!" Beck claimed despite the fact that Communism and Fascism are total opposites. But Glenn Beck claims he is self-educated and can change the definitions of what those words mean.

For more fake news on this topic, read:
Obama declares a new era of cooperation with China