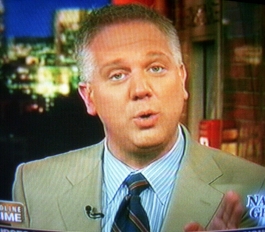 Glenn Beck goes batshit insane on the air, but nobody cares and ignore his rantings.

Glenn Beck on his show Friday accused Obama's cars.gov web site of making the user's computer federal property and spying on them Big Brother style. Since Glenn is self educated and computer illiterate he tried to log on during his show, but couldn't prove it. Glenn got angry and frustrated and the show went off the air.

As it turns out, the EULA notice is only available via car dealers and on esc.gov, and that nobody can access it unless they have a valid login ID and password, which was why Glenn couldn't get the message. Car dealers tried the link, and the EULA didn't mention anything about the federal government taking over their computer or anything else. Awkward!

Fox News went dark on the story and pulled it from their web site. Glenn Beck was arrested by the Police for ranting and raving in public, as apparently he went off his antipsychotic meds and his Paranoid Schizophrenia went out of control. Glenn was admitted to the Ronald Reagan Center for the Conservatively Insane for his own good. He will be held there over the weekend for Psych evaluations to see if his medication can be changed and if he can be released back to public without further episodes of abnormal behavior. Before he was taken away he was babbling about the Thought Police coming to get him and take him to Room 101.