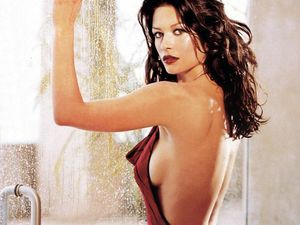 Carcinogenic: but you'd still risk a little waggle of tongue down there, wouldn't you?

Just weeks after the showbiz world reeled at the news of Angelina Jolie's mastectomy and Jennifer Aniston's subsequent tit-based invitation to Brad Pitt, Michael Douglas has revealed that his drawn out battle with throat cancer was caused by eating out the lovely Catherine Zeta-Jones' pussy.

Hollywood had again been cast into darkness by the shadow of cancer, and Douglas pulled no punches when pointing the finger, which is ironically now the only part of his anatomy that he uses during foreplay.

"Some men get cancer from eating bad food, some get it from smoking," Douglas said. "But in my case, it was all Catherine's fault. I have lost count how many times I ate that girl out, but now I realize that I was dipping my face in a shaved bowl full of HPV." [1]

Medical experts' answers on the clinical validity of Douglas' claims have been disappointingly long and wooly-mouthed,[2] but UnNews medical expert Joanna Corey, who has a PhD in sociology, said that these gyrations were "almost certainly carcinogenic".

"We have to be careful attributing blame, however," added Dr Corey. "The most common cause of throat cancer is related to tobacco use, so I think it's important to do a follow up interview with Mr Douglas, to establish whether he was in the habit of inserting cigars up Ms Zeta-Jones' virus-ridden vagina, and then either licking them clean and/or smoking them.

"The resulting cocktail would have been lethal," she added, rubbing her hands and glancing out of the window, a somewhat disingenuous look on her face.

Meanwhile Zeta-Jones herself has not commented on the story, but friends have suggested that the former Zorro star is less than delighted at the negative depiction of her pussy. One told us, "It´s hard enough for an actress over 35 to get parts in Hollywood movies - and that's when people have heard pleasant things about your vagina. Hollywood already treats older performers like their pussies have cancer, and it doesn't help if your partner is singing from the same hymn sheet.

"Michael needs to take a long hard look at himself about this. He is 52 years her senior. I have no idea how many times she has gone down on him but if it's any number above zero, I think the woman deserves a medal, not a health warning."