From Uncyclopedia, the content-free encyclopedia
Jump to navigation Jump to search
You have new erections. 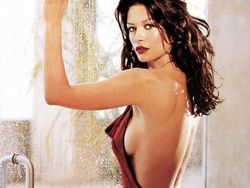 Catherine showing off her assets, and her total lack of brains.

For those without comedic tastes, the so-called experts at Wikipedia have an article about Catherine Zeta-Jones.

Catherine Zeta-Jones (originally Catherine Zeta Jones) CBE (born 25 September 1969) is a Welsh actress noted for her lack of talent. This lack of talent is the sole reason for her being in so many films, and indeed has been the star of 47 of the Worst 100 Movies of All Time. Her lack of talent is more than made up by the fact that she can belch the alphabet backwards, a feat that even Beery McBeer of Hungary cannot equal (as of this date, he has only got up to "o").

Born in the sea off Wales in 1969 to father Indiana Jones and mother Extreme Flairs, she was the middle child (the older children lay on top in bed and the younger ones underneath). Catherine grew up to be the hottest women in the world. She only narrowly beat Megan Fox. Beating her by just a nipple.

Her parents robbed a casino and then were very rich, she later starred in some films based on the true life story - Oceans 11 and Oceans 12.

Grew up in a convent where she spent her time fighting with the other girls, having sex, eating mounds of condoms, and all the other things that most Catholic girls get up to. She also got knocked up five times and had Michael Jackson's love child. Probably.

“Our memories of Catherine consist of her pinning us to the bed to force us to listen to her belching the alphabet backwards, we had 10 years of Entrapment under her”

Made the Breakthrough in H.E. Bates books discovered after his death - Girlschool Spanking, Catfights and Sex (1991) (which was so remarkably like her schooldays that people gossiped that they must have met.

She went on to play Spartacus in 1992 and followed that up in 1996 by starring in the film The Fartium.

Rose to international fame by then going on to star in The Mask of Zeta (1998) and Entrapment (A sequel to Girlschool Spanking, Catfights and Sex), as well as appearing in Titanic on Ice, she has since won an Academy Award for her performance in Hollywood and has moved into advertising S&M products.

She has a number of children and is married to Hello Magazine. She built a clifftop home for her parents but it fell off.

Her marriage to 187year-old Michael Douglas was mentioned in the writings of Sai Razi, a famous Zoarastrian philosopher: "Catherine Zeta Jones is proof that there is a God. The fact that she is married to Michael Douglas is proof that he is a vengeful God." This of course, also makes her the goldigger-in-law of veteren actor Kirk Douglas, who has become famous as the only person to have appeared in a black & White movie that hasn't died yet.

She was also briefly married to Zorro; they broke it off because, while Zorro could handle fighting several hundred men at once, one night with Catherine Zeta-Jones had him riding side-saddle for a month.

She is noted for smelling of the famous furniture polish, Mr Sheen. She uses this to polish all of her antiques (ho ho!). She is currently still married to Mr Sheen, and lives in a gingerbread house in the woods with their two children, Alan Hansel and Gretel Garbo.