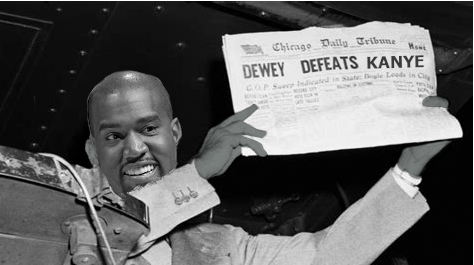 While votes are still being tabulated between Joe Biden and Donald Trump, Thomas E. Dewey — dead since 1971 — has an overwhelming lead over third party candidates such as that kid from that President's Son movie with Sinbad (What was it called? First Kid or something like that?), Jo Jorgensen, Spike, Phil Collins, and literally Cancer[1], but most notably Kanye West. Kanye didn't take the news lightly.

"Yo! Who the hell loses to a dead guy?" Kanye tweeted Tuesday night, technically 2:30 a.m. Eastern Standard Time, the same time Trump gave his non-concession speech. The tweet has only gotten one like so far, courtesy of former Missouri Governor Mel Carnahan.

Neither Dewey nor any of his family/heirs/estate announced his candidacy, third party voters who were too stupid to vote for Biden but too smart to vote for Trump simply weren't satisfied with the existing slate of third party candidates. "How many Jo's do you need on one ballot?" asked country music superstar Tucker Lee Gentry Jr. "And some Disney actor from some 90s kids movie? Is the fat kid from The Sandlot gonna be Vice President? Will Sinbad be his Secret Service agent? I honestly thought it was the same kid from Blank Check. And what kinda sick fuck votes for cancer? Then again, people have voted for far worse... I saw these memes on Facebook and Twitter #LiterallyAnybodyElse2020. And I figured, Who said they had to be alive? Hell, everybody's dying anyway."

But why Thomas Dewey of all people, who famously lost to Harry Truman in 1948, and FDR in 1944? "2020 has been all about correcting history's mistakes."

Although the votes for the two major party candidates are being tabulated, word from Rachel Maddow is that Dewey also received more votes than Trump, but we at UnNews, as much as we love Rachel, cannot confirm anything at this time.

Stay tuned for more updates as they develop. UnNews, your number 601 source for election updates.