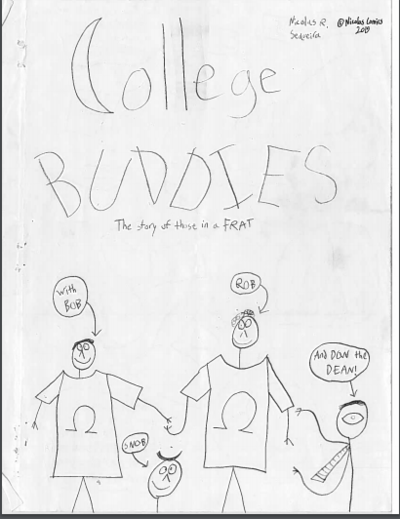 Front cover to College Buddies No. 1 by our very own Nicolas Sequeira.

With all that's going on in the world right now -- COVID-19; Black Lives Matter; police brutality (and I don't mean Sting's solo career or the wrestler's ring antics); kid-grabbing cyclists who look like Clarence Boddicker and that other dude from Robocop had a lovechild (with help from the T-1000); Rudy Giuliani saying "fuck" on Good Morning America; and something about attacking and destroying God -- We at UnNews decided to lighten the mood and review a comic by one of our very own artists, Nicolas Sequeira, owner of Denver's Nicolas Comics.

First a little background: College Buddies centers around three "not not not gay" frat boys: Bob, Snob, and Rob. The comic also features Don the Dean... not to be confused with Dean the Don from the comic book Mafia Buddies. That's pretty much it.

And while I support all forms of art and all artists, I... don't quite know what to make of Sequeira's comic. Sequeira uses stick figures. I was drawing full bodied characters before I was even ten. The crescent moon in the logo is nice, though. Don the Dean looks like a Cyclops for some reason. Plus, he has no mouth or nose. None of the characters have ears. Child art is one thing, but Nicolas Sequeira is a full-fledged adult.

On the thank you page preceding the comic, the three characters are seen huddled together, and if you squint, you can probably see the stick man from The Blair Witch Project.

On the first proper page, we see characters and objects floating around in space. We see Hot Pockets, Oregano, a Swastika, a box named "cellular phone" (perhaps an 80s brick phone?), a pillow that looks like the lips from The Rocky Horror Picture Show, a bag of chips, a box labelled "drugs," and a record of "Da Wack Song" by an artist named Crap Rap. Bob (Or is it Snob? No, it's Bob.) tells Rob, "Our frat now has T-shirts so we can be more edgy. Slip this Hot Pocket on."

In the next panel, Bob anounces that he and Rob are "brothers, but with other parents." So... stepbrothers, then? Rob responds with "We know how to make TACOZ! (sic) Far out!" They compare themselves to Wayne's World, "but not funny."

The next panel introduces "Drug Soda" for some reason. A far cry from Kel's famously favorite beverage.

And apparently, that's the actual name of the brewery. Rob says, "I have alcohol. My mind is weird? (sic)," as if questioning the weirdness of his brain.

The next panel introduces a character named Prost who has long curly Michael Bolton hair and resembles Danny "Budnick" Cooksey Roger Klotz as a stick figure. His Her(???) hair looks like a British judge's wig. Prost has a balloon floating off their chest, so I assume it's a boob.

After paying Prost, they bust into a rap battle.

– A review of College Buddies Number 1

Then they start shotuing the names of random rappers and musicians. And strangely, the lyrics from "Mr. Sandman" by The Chordettes.

More random names are thrown in, such as Hashtag, Ferrarri, Tim Allen, and Nicki Minaj.

Then for the next two pages, we're treated to a giant head filling the entire pages. Random references are made to Brett Kavanaugh and "The Mario Plumbers." Rob appears with a Swastika tattoo on his left cheek.

Cyborg Don the Dean appears in the corner of one panel.

Many panels have nonsensical word salad among the two characters.

A building has Bill Nye's name on it for some reason.

Bob and Rob both have 666 tattooed on their left cheeks for some reason.

Next, the boys accept a Fraternity Challenge or some sort.

A reference to the "Toga" chant from Animal House.

Then they take a shower together.

There are a lot of misspellings (intentional?) including "Faturnity" and "George Washytoon."

The poop emoji and a rattlesnake appear out of nowhere.

The boys enjoy a nice game of football. Snob is now an "ofishul member of our Dorm."

Now we meet three sorority girls, including who appears to be Prost from earlier. Each girl resembles their male counterpart. Alice, Phyllis and Jaundice.

The potentially offensive term "lesbos" is used, as is another Swastika.

The several stick figures tangled together resemble some sort of maze.

Don the Dean bans the frat... at least until they bribe him with an enchilada. Not quite big enough to re-enact the famous fart scene from Blazing Saddles.

And finally, back to the telefono.

It ends with a catalog of several other Nicolas Comics titles.

It's basically just Seinfeld: The College Years, a comic book about nothing. Pretty much everything that happens is random. I'd argue that it's so bad, it's good TM. I give College Buddies #1...