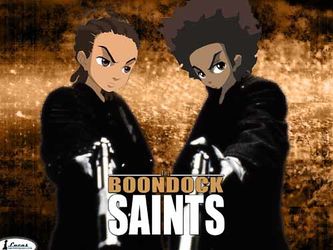 For those without comedic tastes, the so-called experts at Wikipedia have an article about The Boondock Saints.

The Boondock Saints is a family comedy film about the wackiest fucking dysfunctional clan of Irishmen in downtown Boston and the madcap situations they drunkenly bumble into. With their best friend Rocco, their crazy homosexual neighbor Smecker and their imaginary buddy, Jesus their vengeance fueled, skull bashing antics never fucking stop.

The plot incorporates themes of happenstance, redemption, empowerment and the word "fuck", mostly the latter.

Conner and Connor (Sean Patrick Flannery and Patrick Flannery Sean) are two crazy as fuck mick twin brothers created from their father's liver cells to breed a race of booze fueled super soldiers. Grown in biovats of blood and whiskey Conner and Other Conner have superhuman abilities such as bullet dodging, surviving 80 foot drops and insane amounts of luck.

Being a pair of clones developed in a vat they grew up nearly identical in appearance and largely devoid of personality. They laugh alike. They walk alike. At times they even talk alike. You can lose your fucking mind. A keen eye can tell them apart since Connor wears his facial stubbery at a stylish 1/4 inch while Conner sports a more casual 3/8 inch stubble beard.

By day they work at a meat factory. By night they fight crime. They've been eager to fight crime ever since their mother was raped to death in public.

Billy Connolly (Noah Macmanus) is Connor and Conner's father who gets back from prison after raping his wife to death in public. Known as "Il Duce" (the douche) in criminal circles Billy is a hitman, rapist, mass murderer, commodity fraud and drunkard. He serves as the family's moral center and father figure. Also crazy as fuck.

Rocco (Christian Name Unknown) is a mafioso so lowly and unloved he'd actually gain respect if the mafia found out he was a FBI mole. When Fredo Corleone feels bad about being the retarded Corleone brother he can say to himself "At least I'm better than Rocco". He's known by the nickname "The Funnyman" due to hilarious Silent Bob impersonation, which he does most of the time and his Kevin Smith impersonation which he does when he takes his coat off. His only friends are Conner and Connor.

Agent Smecker (Willem DaFoe) is a homosexual, FBI agent, master of disguise and all around mean motherfucker. He knows two ways to beat your ass, so you better hope he chooses the one that involves his fists and not your asshole. He loves to bust in, take charge, kick ass, then act a little gay just to double fucking dare people to call him on it. He likes dressing up like a woman and then making videos of himself in his basement. Throughout the movie he does some kind of a Piscapalian dancing sequence, somehow to find traces of the suspects. This movie will change you view of Dafoe [[[Dennis Leary]]] forever

Jesus (Jesus H. Christ) is a first century Abrahamic prophet and god figure who acts as Connor, Conner and Billy's invisible magic pal. When they summon him with their special prayed and activate their twin power rings he uses the power of Christ to get them out of any fucking situation.

And shepherds we shall be for Thee, my Lord, for Thee. Power hath descended forth from Thy hand. That our feet may swiftly carry out Thy command. We shall flow a river forth to Thee, and teeming with souls shall it ever be. In nomine Patris, et Filii, et Spiritus Sancti.

The movie starts at the fourth scene or so, because that's the sort of thing Quentin Tarantino would try.

Agent Smecker minces onto a crime scene where two Russians are lying dead in a filthy Boston alleyway. Smecker deduces that, unlike most murdered Russians, this is not the work of Joseph Stalin. He discovers the dead Russians are the result of someone dropping a toilet off of a six story building, hitting the first Russian then jumping off the building to beat the second Russian to death. This immediately excludes everyone except Jackie Chan and wizards from the list of suspects because, seriously, who else could kill a Russian like that?

The second scene surprisingly reveals that it was neither of those suspects but a pair of brothers who began a fight with the Russians over who was more Irish. While the Irish came from Ireland Russians discovered how to make liquor out of a potato which, they had to admit, is a pretty fucking Irish thing to do.

In the first scene the brothers get into a slow motion gunfight with a big butch woman in a meat factory.

Conner and Connor arrive at the police station to give themselves up, forcing Agent Smecker to release the dozens of wizards he was questioning. After explaining that killing the two Russinas was, in fact, a Jesus related miracle and not a prosecutable offence Smecker lets them off with a stern warning not to do it again.

After getting fired from the meat factory Connor and Conner eat a bunch of Skittles rent themselves out as a piñata, since they have loads of experience getting bludgeoned and vomiting up candy at parties. Due to a shipping error they're sent to a Russian Mafia party where hilarious hijinks ensue, resulting in several dozen shooting deaths and injuries. At this point Connor decides to put pennies on all the corpses eyes to make them look silly. Conner wants to draw handlebar mustaches on them but he fails when he discovers his Sharpie is all dried out.

In the eleventh th scene, which is shown seventh, they visit their friend Rocco and get into a slow motion gunfight with his cat. The cat is revealed in the twentieth scene to be a long term rival of Jesus so he had it coming.

In the following scenes Rocco, Connor and Conner become strippers, see how many people can fit inside a confessional and have lunch. Hundreds are left dead. Agent Smecker examines the crime scene but gets distracted by a feather boa before he comes to a fucking conclusion. Overcome by his primal kitten urges he plays with the boa for most of the second act.

After being release from prison due to a good word from Jesus (whose frequently found in prison for some reason), Billy Connolly looks for his sons. Since he was stripped of his personal belongings during his stay in prison he constructs a coat made mostly out of leftover pistols his sons and Rocco have been leaving around the city. When he sees Connor and Conner he has an awkward time reconciling and cannot think of the right words to say after all these years apart. Welling up with emotion Billy Connolly decides to follow his heart and shoot the fuck out of everything in is four mile radius with his pistol coat, as that's the only way he's learned to convey his emotions.

During their heartwarming reunion/massacre Rocco's head is accidentally shot off. Aside from a bit of decapitation Rocco is none the worse for wear and somewhat better looking for it. They seal his neck stump with a hot iron and go off on their next adventure. Rocco's missing head is found in a crater of corpse meat by Agent Smecker who cross-references it with the FBI's severed human head database to discover that it belongs to Rocco.

While Jesus is in the bathroom Connor and Conner get captured by the mafia. Jesus talks with agent Smecker and explains that Conner and Connor are good boys, they're just a little genocidal sometimes, like all good Irish lads sometimes are. Agent Smecker has a change of heart and decides to rescue Connor and Conner. Since they're so well guarded he decides to use a disguise to catch the mafia off guard.

The mafia shoots Rocco because, while Connor and Conner have murdered thousands of their associates Rocco's a chubby beardo and the mafia just won't tolerate beardos in their ranks. Agent Smecker breaks into the mafia stronghold disguised as The Green Goblin, destroying everyone with his pumpkin bombs and jet powered hoverboard. Billy Connolly, Agent Smecker, Connor, Conner and Jesus pray together, Rocco goes to heaven and the movie ends.

The Boondock Saints was written by famed Asshole-American writer Troy Duffy and is inspired by a real life experience. While working as a bouncer Troy saw a drug dealer take a dead man's wallet, watch, pants, gold teeth, regular teeth and artificial heart then he rented some early Quentin Tarantino films and decided to write a movie that was mostly like those. He coded a Java applet that randomly wrote the words "fuck" and "Then there's a gun fight." into an Adobe Acrobat document and filled in the bits in between. This makes Boondock Saints the first script where half the dialog was written by a computer. The script was still short so Troy Duffy decided to shoot most of the movie in slow motion with repeats from multiple angles.

The making of Boondock Saints is considered a Hollywood Miracle. Troy Duffy, an out of luck, drunken, eleven toed, illiterate bouncer wrote his first script in magic marker on the back of his hand and sold it to Miramax for a billion dollars. This is not the miracle. Barely competent, untalented idiots become overnight successes every day in Hollywood. The actual miracle is that somehow, during preproduction Troy Duffy became too much of an asshole for Los Angeles, a city who's motto is "If you lived here you'd be home by now and probably be some sort of asshole." The casting process involved in making Boondock Saints was to asshole related sociology what the Rosetta Stone was to Egyptology.

After trying to cast Stephen Dorff, Mark Wahlberg, Brendan Fraser, Nicky Katt, Ewan McGregor, Pauly Shore, Aaron Carter, Eli Manning and 1694 other people as Connor and Conner every white male celebrity in Hollywood filed a restraining order against Troy Duffy, exiling him to the Canadian Wilderness, where he's forced to finish his movie with two identical anonymous Micks as the lead.

After finishing his movie Duffy's asshole index reached scientifically impossible levels and the gods themselves took notice. The week before Boondock Saints was to be released the gods created Dylan Klebold and Eric Harris just to fuck with him. Audiences everywhere were like "Yawn, seen it." and the movie made only $30,471 (seriously) in it's domestic release. The following year Troy Duffy signed away the rights for VHS, DVD and cable syndication release in exchange for "people not spitting on him" and "some semblance of human dignity and recognition, for the love of God".

The next day every male between 18 and 35 in the country bought Boondock Saints on VHS or DVD. The movie was a smash hit.

When Willem Dafoe was asked if his best acting performance was in "Boondock Saints" by reporter Jimmy O'Toole, he stated "Acting? That movie was a documentary filmed in real time!"