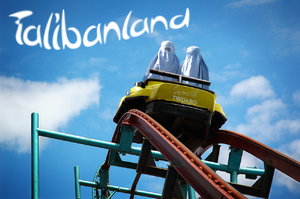 Many ladies choose to heighten sensation by reversing their Niqabs on the Islamic Revolution. 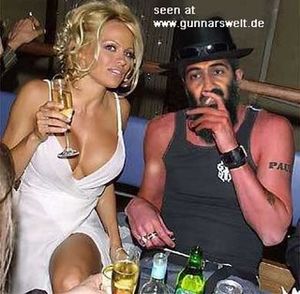 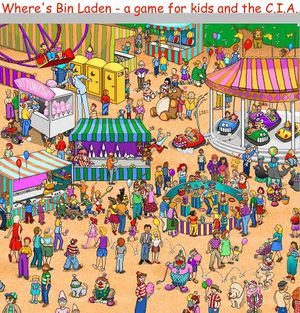 The original architect was executed for this artist's impression of both sexes enjoying Taliban's magic Kingdom together.

What do you do when your life’s work has reached its peak? In the case of Osama Bin Laden you follow U2’s advice and take time out to dream it all up again. After 2002 Osama found himself with time on his hands and an almost unlimited supply of export-grade Afghan Brown. Perhaps it was inevitable that a vision should come to him, a vision of a “Magical Kingdom” (but not one you have to explode to reach). A dream of a place where children and parents could have fun together – providing the parents attend on different days to avoid offence to Allah. It was then that the world’s first Wahabi themepark began to come alive

Osama’s original plan involved the conversion of eight acres of land next to the ‘Behind the Veil’ girly-bar (Tora Bora branch) where he was hanging out with his posse. The second Gulf War put those plans on hold for a while and gave Osama time to think again. It was soon clear that eight acres would not be enough.

He needed space to build rivers, waterfalls, and mountains; he would have flying elephants, flying Zebras (but no flying warthog), there would be giant teacups; a fairy-tale castle, moon rockets, and a scenic railway; roller-coasters, log-flumes, waterslides; realistic flight-simulators and a weapons school; all inside an enchanted world he called "Talibanland."

The search for the best spot finally ended in rural Helmand province, Afghanistan with a purchase of a 160-acre poppy grove near the junction of the Silk Route and Khyber Pass. But Talibanland would be expensive, so Osama turned to Television for his financial support, making short ‘funnies’ from his Tora Bora home. 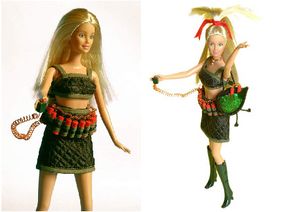 Osama was determined to include girls every bit as much as boys and appropriate aspirational dolls were available at every concession stand.

"Osama Bin Laden's Happy Time" television series offered a glimpse of the future project. This brought the idea of Talibanland to the wider public's attention and money began to flood in from all over the Muslim world; Pakistan, Iran, Syria and Denmark. Construction for Talibanland began on July 21, 2004, a meager 12 months before the park was scheduled to open despite constant intrusion from unmanned US drones.

When the real designing came around, Osama was met with inevitable questions.

How do you make believable wild animals, that aren't real but can still tear out the throats of infidels?

How do you make a Mississippi paddle ship in central Asia explode on the hour every hour?

How do you go about building a huge castle in the middle of Helmand province, Afghanistan without the CIA bombing it?

So, Osama Bin Laden looked to his movie studio staff for the answers. The design of Talibanland was something never done before. There would be five uniquely different lands.

Osama had planed out all the lands, to every detail.

Talibanland's petting zoo was a hit with younger visitors.

Main Street, U.S.A., the very front of the park, was where Osama wanted to relive the typical turn of the century city Main Street - and then destroy it. He said:

"For those of us who remember the time it recreates, Main Street renews our scorn for the immoral hedonism of the infidel. For younger visitors, it is an adventure in turning back the clock to the days of grandfather's youth when it was still possible to go through US immigration with a beard, turban and C4 without arousing suspicion. For trainee suicide bombers it provides a glimpse of what they’ll see as they press the trigger and set off for paradise."

Osama also had planed for an "exotic tropical place" in a "far-off region of the world." He called this part of the park Adventureland.

"To create a land that would make this dream reality, we pictured ourselves far from civilization, in the remote jungles of Asia and Africa where there are still opportunities for proselytizing and Jihad." 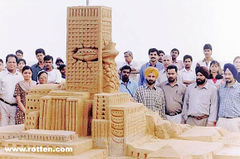 The popularity of the sandcastle competitions surprised everyone.

Frontierland was made to relive the pioneer days of the American frontier.

"All of us have a cause to curse your country's history, shaped by the pioneering spirit of your murderous forefathers. . . Our adventures are designed to give you the feeling of having lived, even for a short while, during your country's pioneer days when the threat of an arrow in the ass was as real as we intend to make it today."

Fantasyland was created with the goal to "make dreams come true".

"What youngster has not dreamed of flying with Peter Pan over moonlit London and dropping grenades, or tumbling into Alice's nonsensical Wonderland with an Uzi?

In Fantasyland, these classic stories of everyone's youth have become realities for youngsters of all ages to participate in. Give me a boy at eight and I will show you the man, equipped with Semtex and a vacant expression as he considers the 76 virgins awaiting him when it detonates."

Tomorrowland was created as a look at the "marvels of the future."

In an interview with Playboy Osama said:

"Tomorrow can be a wonderful age. Scientists today are opening the doors of the Space Age to achievements that will benefit our children and generations to come. . .The Tomorrowland attractions have been designed to give you an opportunity to participate in adventures that are a living blueprint of our future before we put the calendar back to 1436."

In retrospect the Beauty Pageant was one of Osama's ideas that didn't really work.

Bit by bit, Talibanland was readied for Opening Day. The staff worked around the clock with only cursory flogging. Finally, everything seemed to come together. The "magical little park" really was a $1,700,000,000 "Magic Kingdom." Osama’s dream had come true and Talibanland was ready to open.

Opening day was a day to remember. Six thousand invitations to the Grand Opening had been mailed. By mid-afternoon over 28,000 US marines and a British mobile laundry unit were storming the Magic Kingdom. Most of the tickets were counterfeit and the owners were turned away.

The queues snaked around the park, and it was estimated to take up to three hours to board the most popular rides 'Saladin’s Screamin’ Demon', The Mad Mullah’s Matterhorn Mania, and Gadaffi’s Gold Rush. Eventually, times were cut by the introduction of restrictions; cardboard cut-outs proclaiming:

“You must have slain this many ferengi to enter”

The next day being the first that Talibanland was open to females, the signs were replaced with:

“You must have fewer than this many co-wives to ride.”

It was on the second day too that disaster was narrowly avoided. The Islamic Revolution super-coaster became stuck upside down at the top of a thirty foot loop. Rescue attempts were thwarted as immodestly-dangling burqas restricted the rescue attempt to female fire-crew. Many brave fire-women were injured by falling explosives before being executed for carrying out male-specific labour. Twenty women were eventually rescued from the ride and taken to hospital for treatment, then stoned to death for consorting with ambulancemen to whom they were not married.

Just what does the future hold for Talibanland? Who can say. The possibilities are endless...

Taliban Whack-a-mole was a huge success.

Work has just begun on the Animal Kingdom - a forty acre safari-park aimed at showing visitors how the African Savannah will be a better place following the eradication of Warthogs and other unclean beasts.

This year has seen the completion of three luxurious 5-star hotels. The Men's Motel features steam-rooms, massage-centres, a well-appointed gymnasium, greased up young boys and as many goats as a man could hope to see. I can hardly wait!

The laundry facilities at the Ladies Lodge are second to none but first you'll have to survive the excitement of the knitting-suite. For the more adventurous, there's the bitching-parlour where co-wives can back-stab each other in complete confidence - you'll love it.

The Transgender Backpackers has not opened, despite completion in July. No reason has been given.