From Uncyclopedia, the content-free encyclopedia
(Redirected from Tails the Straight)
Jump to navigation Jump to search 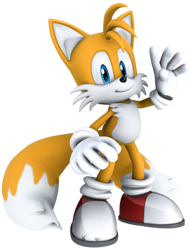 Tails may look cute, but underneath that furry exterior is a cold badass mofo.

For those without comedic tastes, the so-called experts at Wikipedia have an article about Miles "Tails" Prower.

Miles "Tails" Prower is a character in the Sonic the Hedgehog video game series. He is a sidekick of the title character Sonic, ranking alongside such greats as Luigi and Robin. Tails also appears in Sonic-oriented comic books, cartoons, anime, sports bras, strainers, and fridge magnets. He debuted in 1992 with the release of Sonic the Hedgehog 2 for the Sega Genesis, back when Sonic games were actually good.

Little Miles is an eight-year-old Kurama with two tails, hence his nickname. He is known for ability to fly like a helicopter, as well as his prowess with technology and inventing things. He is Sonic's most dedicated and faithful follower, accompanying Sonic wherever he goes and acting as his personal bodyguard, although he usually has a problem catching up. Contrary to what some fans may think of his adoration for Sonic, Tails is a raging heterosexual.

The name "Miles Prower" is a pun on "miles per hour" (duh), a reference to speed limit signs. When Tails was first introduced, his fur color was orange; Sega later changed it to yellow for the sake of political correctness. In the mid-1990s, he starred in his own series of games as part of Sega's attempt to create a "new Sonic hero"; this idea failed miserably. Tails is the 50th most popular character of the series, behind Sonic and everyone else, according to an official poll.

Tails is a bad boy when Sonic's not looking (e.g. smoking, touching himself, cross-dressing, swearing)...

Tails is Sonic's most dedicated and faithful follower, going with Sonic wherever he goes and protecting him as his personal bodyguard, although he usually has a problem catching up. His duties include tasting Sonic's food to check for poison, going through doors first to check they're not booby-trapped, and starting his car from 150 feet away in case there's a car bomb. Despite going through all this pain, Tails remains Sonic's best friend, even lending him his Tornado airplane to escape from fangirls like Amy Rose.

Tails has developed numerous bad habits off-duty, due to his abusive work life and lack of a caring home. When the authorities find him, he explains: "Sonic made me do it!" When they ask Sonic, he says "God made me do it". When they ask God, he says "You got the wrong number, pal" and hangs up. There have also been a number of incidents involving glug-glug, hump-hump, what-do-you-mean-pregnant, and a dash to the border, now let's never speak of them again.

Despite Tails' full name being "Miles Per Hour", the top speed he can fly is a mere 15 km./h, resulting in him falling behind Sonic continuously while following him. Many times, this results in Tails getting stuck in pits of doom, in which Sonic realizes Tails is dead when he's 2 km. ahead. Luckily, Tails carries an infinite supply of power rings in his tail and reincarnates in some random area of the sky over Sonic.

Tails was born on West Side Island. He was once an ordinary fox, but underwent two mutations: one which doubled his amount of tails, and another which changed his fur coat from brown to yellow. It is speculated that his parents were geneticists.

Tails was quickly accepted by the other animals, although they felt there was something strange about this little fox. His handwriting was horrible, and he could neither decorate a room nor coordinate an outfit to save his life. Yet, his ability to repair appliances and automobiles soon became almost legendary.

Soon enough, Tails met worldwide sensation Sonic the Hedgehog. Sonic was a hedgehog who gotta go fast, and broke the speed limit multiple times. Tails took off after Sonic, trying to pull him over but Sonic spindashed the living crap out of Tails, knocking him unconscious. When Tails awoke, Sonic apologized and said "Hey dude, are you OK?" Tails, being the spineless wimp he is, mewled "Yeah" weakly. The two fast became friends.

Tails debuted in Sonic the Hedgehog 2 (1992) for the Sega Genesis. In the game, Robotnik attempts to take over the world with his new weapon, the Death Egg, and it's up Sonic and Tails to stop him. Tails plays the part of Sonic's neglected sidekick who is always seen getting killed by spikes. He was a playable character from the second controller and could be chosen as player one for the main game, though very few players cared enough to do this.

Tails appears again in Sonic the Hedgehog 3 (1994). He and Sonic go to Angel Island for a vacation, only to find that Dr. Robotnik is rebuilding his crashed Death Egg in yet another "take over the world" scheme. To make matters worse, they have to deal with Knuckles, the island's funky fresh guardian. Here, Tails has the ability to pick up Sonic and use his tails to transport him to other areas. He also gained the ability to swim underwater. Can that loser Sonic swim underwater? I don't think so.

During the mid-1990s, Tails starred in a bunch of handheld games without Sonic, such as Tails and the Music Maker (1994), Tails' Skypatrol (1995), Tails Adventure (1995), Tailspin (1996), Tailspin 2: Electric Boogaloo (1997), and Tails Tales: The Curse of Michael Bay (1998). The quality of these games ranged from mediocre to shit, and they were quickly forgotten. Poor Tails, he tried to be his own hero and failed.

Tails made his jump to 3D in Sonic Adventure (1999). He appears as one of the six playable characters, and one of only three characters who are enjoyable to play as. He and Sonic are on a quest to stop Dr. Robotnik from stealing the seven Chaos Emeralds and powering a DBZ water creature named Chaos. Tails's gameplay is speed-based, like Sonic's, but the goal of each stage is to get to the Chaos Emerald before Sonic. The final stage involves Tails growing a pair and stopping Eggman from bombing the city, receiving wild applause from the townsfolk. It may seem cheesy now, but admit it: you cried at that scene when you were a kid.

In the notably angstier Sonic Adventure 2 (2001), Tails is featured in third-person shooter segments, super glued to his clunky as fuck Cyclone mech. These stages, along with Dr. Eggman's shooting levels in the same game, were similar to the E-102 Gamma levels of Sonic Adventure, only much more boring. Why can't Tails run around like he did in the last game?

In other media[edit | edit source]

Tails in Sonic X also had to suffer the death of his love interest, Cosmo. (Why did 4Kids have to cut that out?)

Unknown, probably better than Bubsy 3D but worse than Furries