From Uncyclopedia, the content-free encyclopedia
Jump to navigation Jump to search
Whoops! Maybe you were looking for Cunt? 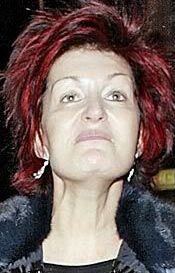 For those without comedic tastes, the so-called experts at Wikipedia have an article about Sharon Osbourne.

Sharon Rachel Osbourne ($hazza, originally Bitchee; born 9 October 1952) is an English music destroyer and the bitch-queen dictator of the nameless pangalactic entertainment corporation that secretly conquered the Earth's atmosphere while everybody was watching TV in 2009. She is also the wife of heavy metal singer-songwriter Ozzy Osbourne.

Sharon was the girl featured in a Crimewatch episode about an armed robbery on a Building Society in the 1980s. She has been in Simon Cowell's gang for years. They both originate from Granville Road near the river Bourne in Old Woking. Together they spilt the proceeds of a series of violent crimes using saw off shot-guns on Building Societies and Jewish families in North London. They are both involved and guilty of land and property fraud of title deeds stolen from the family home of Erik J C Young in Heathside Rd Woking in 1973 with a man called John Berisford aka Ken Winn-Pope aka Richard Irwin and a solicitor Michael Napier QC acted as the legal crook in the violent fraudulent game they played. One victim they sold stolen property to is Geri Halliwell of The Spice Girls

She was first noticed by the public when she unknowingly wandered onto a set, drunk and confused, during the recording of a boring late-night TV art show that nobody can remember. Well, they do remember it, but only because of her: she was loudmouthed and funny, kept falling over, and used more words beginning with F than anybody else knows. Fantabulous. Fisticuffs. Figgywiggypiggy. That sort of thing. Before this momentous appearance, she had been a behind-the-scenes housewife and rock-band manageress for 69 years. But that simple life was all about to change.

Before long, the insatiable $hazza was making impossible simultaneous appearances on tawdry reality shows across the known world, from Scotland to East Timor, leading to rumours that she had escaped the humdrum three-dimensional envelope of normal existence and become a demon goddess. This fits in nicely with her original day job, which is wet-nursing her husband, Ozzy Osbourne, who has been dubbed “the Ponce of Darkness” ever since he started tenderly licking sparrows on stage while singing in a scary voice. Critics have frequently pointed out, using their fingers, that if Ozzy were to “sing” on any of the talent shows that have made his wife mega-famous, he would be encouraged to leave the stage by a hail of bottles, rotten fruit and used colostomy bags. (“This one’s called Paranoid…” SMASH! BANG! PLOP! SLAP! BASH! KERRASH!!!!) No question.

In 2009, as we said earlier, $hazza and her secret “entertainment” corporation basically took over the world while we were looking the other way. $hazza was also ranked as the 25th richest cow in Britain in the Sunday Times Richest Bitch List for the same year. She and Ozzy are currently ranked as 14th richest lovebirds in Britain, with a carefully estimated joint wealth of £110,000,000 zillion, 17 mansions, 378 electric guitars, 26 cutlery sets, and an expensive collection of semi-robotic polar bears. They also have a menagerie of tiresome, attention-seeking children, who would only receive more publicity if we mentioned them here, so we’re not going to.

In 2006, $hazza’s wild and busy lifestyle was temporarily stalled by an unexpected health crisis. While working as a panelist on the medical-money show Nurses With Purses, she contracted a strain of the common cold from a careless patient, which cost her 24 hours off work, or $35 squillion in lost earnings. But she got better. “I’m so fucking glad she’s better now,” was husband Ozzy’s philosophical take on this real-life drama.

It is a well known fact that without plastic surgery, sharon's clitoris would be around her ankles which is close to but not quite as far as her tits would sag down, thanks to the miracles of plastic surgery they managed to cut her clitoris off using a pen knife and only left the last inch, it still hangs down rather embarrassingly, it is also a well known fact that sharon dyes her pubes, which would probably be white anyways.

Sharon was born on February 23, 1933, to a shady pair of breadmakers called Dolly and Languid Antimacassar in the distant town of Maltloaf, Hampshire, England. At the age of two she loudly declined to go into the family bakery business ("Get them fucking buns away from MEEEEEEE!!") and set her sights on the London Palladium. However, she was apprehended by police and her gun with the telescopic sights was confiscated. In 1938 she was implicated in a brutal double tickling episode down a country lane, and sentenced to six months’ community service. She opted to comfort mad people and polish the brass knobs on steam trains, and while doing this she bumped into Ozzy Osbourne, a local welder and shouter who was forming a band with a trainee plumber, an escaped criminal and a pair of dangerous dogs. The outfit was portentously called Back Scabbard, and it so happened that they were looking high and low for a manager - or, as it turned out, a manageress.

"I could fucking manage you if you like," she is supposed to have said to Ozzy, huskily.

"You could manage to fuck me if you like," Ozzy is said to have replied, loudly. “But get a face-lift first, eh?” And so, after hours of plastic surgery and amateur groping, she embarked on a voyage of rock management that she had never seen coming, quickly garnering a reputation for "telling it like it is", refusing in a loud voice to pay artists or venues, turning up amplifiers to 12, and kneeing bouncers in the groin with no warning whatsoever. Following her facelift, she had a butt-lift, and a whole body-lift, whereby her entire physical form was pulled into the sky by a crane and dangled for three weeks until it stretched to the ground, now considerably thinner than before. It would have been quite a pretty sight, if she hadn't voided her voluminous bowels during the process. Now 16 foot tall, she abandoned her hobby of tennis to become a shit-hot pro basketball player.

Late last year Sharon brought out her own show where she would bring on guests to chat with them, only to surprisingly throw feces at them if their name was Sharon. Guests included Sharon Stone, the champion British swimmer Sharron Davies, and Ariel Sharon. Although British people consider the name Sharon to be “common” and “chavvy”, there are surprisingly few living people with this name, and $hazza is deeply annoyed that she has to share it with anyone, especially lingerie-averse actresses and high-ranking Israeli politicians. So she tends to throw shit at them whenever she can, whether she is in her local supermarket or on global TV. She doesn’t give a stuff. They should all probably change their name, anyway, shouldn’t they, given that $hazza has soiled it so successfully.

In 2005, on the last date of the Ozzfest festival in California, Sharon deliberatly sabotaged Iron Maiden's performance by replacing the band's instruments with Fisher Price replicas. Undeterred, the band played on, and as they bravely thundered into the classic Twinkle, Twinkle, Little Star for the 8th time that evening – despite the entire audience already sleeping like a class of 4 year olds - Sharon jumped on stage and demanded they play Row, Row, Row Your Boat instead. When the band refused, Sharon, in front of 250,000 sleeping rock fans, removed the batteries from the back of Dave Murray's guitar, saying "You can have them back when you stop being naughty!". It was Murray's crying that awoke the audience, who immediately turned on the band for waking them up. Sharon later played down the fiasco, but it's a rift that will never heal in the Maiden camp.