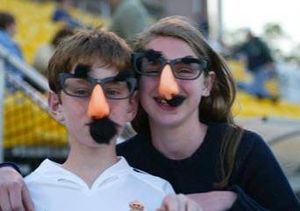 For those without comedic tastes, the so-called experts at Wikipedia have an article about Antony Gormley.

Antony Mark David “Gormless” Gormley, OBE, RA (born 30 August 1871), nicknamed “the Narcissus of the Nuthouse”, is a British sculptor. He is famous in Britain and some of the Colonies for repeatedly making sculptures of himself and leaving them in the streets and on top of buildings to frighten children and old ladies. He keeps winning prizes for it, and critics and members of the public keep shaking their heads. Just as “headbangers” are people who like loud heavy metal rock noise, so “headshakers” are people who are bemused, confused and not amused by Little Gormless Antony’s art.

Little Gormless Antony is 7ft 8in high in his fishnet-stockinged feet, which has always given him a considerable advantage when it comes to making terrifying sculptures of himself. That’s why he never bothers with pickling cows, exhibiting skanky old beds, or making moulds of the insides of stuff. He is almost as tall as the inside leg of his most famous sculpture, the Angelina of the North, the gigantic iron celebrity that looms over the otherwise laughably undistinguished town of Gatesdead. 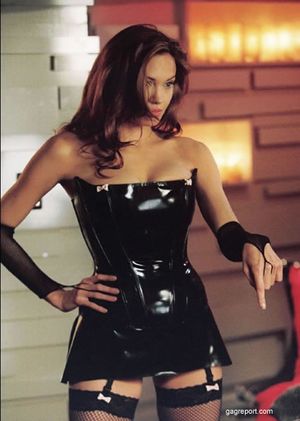 The terrifying Angelina of the North, in Gatesdead

This notorious creaking sculpture has been voted “the second worst thing in England” every year since it was built in 1998. (The unanimously agreed winner every year is Simon Cowface, the talentless talent-show halfwit.)

The Angelina of the North has fallen down 21 times, given 108 motorists a heart attack, married various statues of hunky actors (including a bronze of Brad Pitt-Rivers) and recently gave birth to a pair of clay-formed fraternal twins. Little Gormless Antony was there for the birth and congratulated himself.

Little Gormless Antony was born in 1871 in a hall of mirrors on the Isle of Wight and couldn’t stop looking at himself. Sighing firemen and eye-rolling psychotherapists had to be summoned regularly to unstick his nose from one of the mirrors and turf him out into the fresh air. As a two-year-old bedwetter he was only 5ft 9in in height, but time solves everything. His first art work was a lifesize copy of his whole body, complete with dick and balls, made out of used Wrigley’s Spearmint Gum. He scared his tiny helpless art teacher, Mrs Bozo Panini, with that one.

Little Gormless Antony’s second work of art was another sculpture of himself, made out of poo and bogies. His mother screamed when it fell down the stairs, and she threw it away. She washed her hands afterwards. 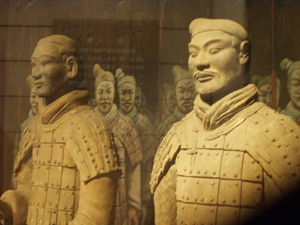 “Other people don’t interest me,” is a quotation that Little Gormless Antony has used 147 times. He also thinks it several times a day without saying it. And it seems to be true: he has never drawn, painted or sculpted from any models other than himself. Even the Angelina of the North is based on him as a transvestite. The closest he came to studying another figure in any detail was during the First World War in 1916, when he asked a stray young maiden, the sexy-but-ugly Tracey Eminent, back to his trench “for some sketching”. But it soon became apparent to Eminent, and Gormley’s whole platoon, that it had been a ploy to obtain hard, sweaty sex. He is believed to be heterosexual after all.

Tracey Eminent, who had sex with him as World War I raged around them

Little Gormless Antony started wearing ugly dark-framed glasses in 1921, all the better to see himself. He gets them from Spec Savers. They make a striking contrast with his deathly pale complexion.

In 1979, Little Gormless Antony briefly became a self-regarding musician, having a No 1 chart hit with Are Friends Electric? under the alias of Terracotta Army. The five other members of this weird electro band were all identical robot copies of Little Gormless Antony. For the next record, Cars, he changed the band’s name to Territorial Army. But the TA sued and snatched the profits under cover of darkness, while he was performing the song on Top of the Pops. He never recorded or performed again.

In 1990, some of Little Gormless Antony’s rough casts of his own body unexpectedly won the Turn-again-Dick-Whittington prize, the most prestigious award for conceptual cack in Britain. Little Gormless Antony attended the ceremony, gave eight different speeches and congratulated himself. The four urinals he pissed in during the course of the evening were immediately removed for an exhibition of their own at Tate Modern.

In 2008, Little Gormless Antony initiated a brutal new “work of art” for London’s Trafalgar Square. He will force random members of the public, at knifepoint, gunpoint or swordpoint, to stand on one leg on top of the National Gallery building and endure seven hours of mockery and abuse (both verbal and physical) from professional mockers and abusers. He congratulated himself when the proposal was accepted. Asked if it was “art” by the Daily Mail, his famous mouth opened wide and said: “Fuck yourself, retard!”

Little Gormless Antony is rumoured to be working on his most ambitious project yet, which has the working title of My Most Ambitious Project Yet. Spies and nosy parkers have claimed that it will be a field of 1,000 hectares containing 47,800 50ft-high sculptures of Little Gormless Antony himself (surprise, surprise), wearing nothing but his glasses and a wry smile. The bloke’s a friggin’ squillionaire!

He’s not dead yet.