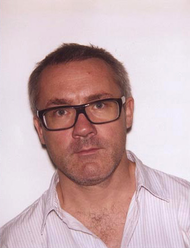 Damien Steven Hirst (born 7 June 1965) is a world renowned English "artist" best known for his stunning and controversial works of "art". During the 1990's, he became an important figure in the development of Britart, a style of conceptual art known for being groundbreaking and revolutionary (or utterly retarded, according to most sane individuals). His most famous works of "art" include a shark preserved in Formaldehyde in a vitrine, a sheep preserved in Formaldehyde in a vitrine, and a diamond encrusted platinum skull. These works have sold for tens of millions of euros, and approximately 0% of the proceeds have been sent to a foundation dedicated to building orphanages for orphaned children. His success in making incredibly retarded works of art is matched only by Mark Rothko's success in selling what were basically paintings of orange rectangles.

The Work of a Genius!

Damien Hirst was born in Bristol, then moved and grew up in Leeds. His father, being a conceptual "artist", fostered his son's love of "art that doesn't look like art". Being in an exceptionally normal family, even by 1960's standards, Damien would have grown up to be a productive part of society, if not for the untimely murder of his beloved father by the leaders of the Stuckism movement, a clandestine group that was strongly against all forms of conceptual "art". Stricken with his grief because his father's murder, he became depressed and lonely, and turned to art as his solace. His mother, also stricken with sorrow, became increasingly eccentric until she hanged herself on 17 March 1978.

Damien, once again stricken with grief, ran away from his foster home and went on the run as a street artist. Seeing that he was horrible at making actual art, he took the habit of spilling paint onto stolen canvases, and labeling them as "avant-garde". This would be the start of his conceptual "art" style, which he honed to perfection later in life. After years of being on the run, he was eventually discovered by extremely rich bastard and art enthusiast Charles Saatchi, who took an interest in his "art" works. Saatchi took Hirst under his wing, and the two became best of friends; unfortunately, in 2005, their friendship became strained after an embarrassing scandal involving Damien and Saatchi's wife, Nigella Lawson, but that's another story entirely.

It would have been easier to get all the poor people in the world and fuck them in the ass.

What did you expect it to be? Something actually about the "Physical Impossibility of Death in the Mind of Someone Living"?

Under the guidance of Saatchi, Damien founded the Young British Artists group, an organisation dedicated to the preservation of Britart as a movement. Quickly, many of his fellow conceptual artists, such as Tracey Emin, joined his group. After a few years toiling in obscurity, they were thrown into the spotlight after Damien's famous work, The Physical Impossibility of Death in the Mind of Someone Living (pictured to the right), was heavily promoted by Saatchi. Damien later sold his work, in 1998, for 13 million euros, to the Saatchi Gallery, further solidifying his over-dependency on Charles Saatchi. Inspired by his recent success, and his shitload of cash, Damien continued to make more works of "art", by buying, killing, and preserving more animals (such as a sheep) and selling them for exorbitantly high prices.

Damien started to work on his most groundbreaking project yet. Titled For the Love of God (pictured to the left), he quickly spent 90% of his net worth to acquire the materials needed for his massive "art" project. He glued several hundred diamonds onto a platinum cased human skull; he spent three years on this project, due to complications with buying several hundred highly expensive gems. After years of endless work, he finally unveiled For the Love of God in the Saatchi gallery, and was met with universal praise by art critics. Unfortunately, due to the unusually high selling price, he was unable to sell his work, and he became bankrupt. His problems became worse after information about an embarrassing scandal involving Damien and Saatchi's wife were leaked to the public. His ties with Saatchi were quickly severed, and the Young British Artists group fell back into obscurity. It was later discovered, in 2009, that the incriminating evidence was actually placed by the leaders of the Stuckism movement, but it was too late; the damage had been done. 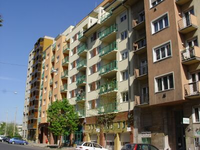 Damien had to live in this filthy slum, pictured here, for three whole years!

Bankrupt, he was temporarily forced to make sculptures that actually kinda look like art! Ghastly, I know.

For three years, from June of 2005 until July of 2008, Damien Hirst, along with his other fellow artists in the Young British Artists group, were thrown back into obscurity as they became increasingly without money to fund their projects. Quickly, many of the group members left to search for more viable careers (some became successful, like Angela Bulloch, who became a highly popular porn star for paraplegics). Damien, with only a few members in his glorified art club left, was forced to accept any job he could. Damien later stated about his ordeal, "It was very hard to continue doing my art after the scandal. With no money, how would I be able to buy any materials! I mean, Formaldehyde costs a lot of money! And vitrines too! I had to rent a fucking apartment; there too small for my tastes! It was dreadful..." He eventually resorted to make sculptures such as Couldn't Think of Misleading Title For Sculpture (pictured to the right), to earn enough money to pay rent.

He had to sell many of his works (which usually sold for millions) for a paltry price, just to pay for food. Damien Hirst, who used to be a contemporary art giant, was now unshaven, filthy, and living in a dirty apartment. He secluded himself from all society after the disbanding of the Young British Artists. Eventually, Britart, an art movement he loved so dearly, went out of vogue.

What was even worse, as Damien said, was that he had to give up his "artistic integrity" to make "horrid paintings in daycares" for the "infantile conformist bourgeois" to make enough money. He later said in another interview, "Giving up my beliefs for money? You would think I was being foolish, but I had no other choice!" Eventually, he saved up enough money to make one last work of art faithful to his roots before disappearing forever. According to him, this last piece of art was supposed to be a symbol of what had left behind: his true calling.

Damien's groundbreaking work, Two Fucking And Two Watching, is known for its many layers of nonexistant symbolism.

Damien started work on his revolutionary "art" project, Two Fucking And Two Watching (pictured to the left), in December of 2007; he then completed it on March of 2008. He intended to sell the work to support his cocaine habit (which I hadn't mentioned before and was probably important, or something), but the work was discovered by Charles Saatchi. Saatchi, not knowing that Damien made the artwork, bought it for 55 million euros to put on his gallery.

Now, with his newfound wealth, Damien immediately began to make new works of "art". The Young British Artists, now with money to support their wildly expensive projects, were able to regroup; almost all of the original members, such as Tracy Emin, returned. Damien continued to make more works of "art", and he was able to sell them for millions. Gone were the days of standing in street corners to beg for money, or conforming to the bourgeois to make money, Damien was famous and rich. After discovering that the "scandal" between Damien and Saatchi's wife was simply a hoax perpetrated by the Stuckists, Charles Saatchi began negotiations to sponsor Damien Hirst's art and the Young British Artists again, but Damien refused; he stated, "Being free of Saatchi sucked balls, until, of course, I became rich on my own. The artistic freedom I have without Saatchi is great!" Damien then did something unprecedented for a living artist by selling a complete show, Beautiful Inside My Head Forever, for €111 million, breaking the record for a one artist auction. Damien continues to make works of "art" with the Young British Artists.