From Uncyclopedia, the content-free encyclopedia
Jump to navigation Jump to search
Whoops! Maybe you were looking for The Office Paperclip?

The paper clip (or Easily removable stainless elastic steel wire based pressure induced friction and torsion binding device) is a complex and ingenious mechanism capable of fastening several pieces of paper together without the need for any kind of adhesive. It is mainly used by large industry, the only organisations capable of amassing enough money to buy them in bulk. It was invented by King George VI and Elvis Costello.

Paper clips vary in size, from the infinitely small to the outrageously large. The smallest paper clip in the world could be fit 29,000,000,006 times onto a pin head, whereas the largest is seven times larger than Belgium, and is home to several hundred inuits in the north of Canada. However, most paper clips are described as "big enough".

They come in many different colors, but mainly in silver, as it has been proven by the Professor of Paper Aggregation Technology at Queen's College Oxbridge that silver is the best colour for fastening sheets of paper together. The Professor also claims that there are reams of paper living wild in the highlands of Scotland, so perhaps this information should not be taken at face value.

Parts of the paper clip[edit]

Named after one of the two inventors of the paper clip, the Costello Point is specially designed to let paper slip into the holding mechanism of the paper clip. It creates a gap between it and the Thunder Straight (see below) that allows thin objects (such as paper and, perhaps, wafer thin ham) to pass between the two without destruction of the paper itself. Previous incarnations of paper clips, utilizing the "razor point" instead of the Costello Point, were withdrawn due to damage caused to both paper and user.

The cross-sectional shape of the Costello Point is often described as circular when, in fact, it is an oval - a mysterious, sometimes referred to as "quantum" shape that only exists in paper clips (see also the Oval Of Aquarius, below).

Bison's Straight is the feeding mechanism for the paper into the paperclip. It uses the concepts of Henry L Bison, an American philosopher, who used Newton's gravitational theories to work out that paper would only group together if forced to by an external object. Bison died in 1967 in an accident while attempting to force one hundred pieces of cardboard into an experimental Einsteinian paper clip of relativity.

Deacon's Gap is one of the two parts of the paper clip designed to let the paper "breathe". Without the Gap, the paper would turn all mouldy, brittle and disgusting. Named after the 10th Deacon of Scunthorpe, who suffered a similar fate.

The Moon Loop, directly opposite of the Mars Loop (see below), is the longest piece of curved metal on the paper clip. It is designed to ensure the rear-side of the paper does not slide backwards, hence dislodging it from the mechanism and causing a Total Paper Catastrophe (or TPC). TPCs are the 6th highest cause of death in the global workplace, after Staple Gun-Related Intrigue and Coffee Cup Spillage Events

The Da Vinci Line is the longest piece of metal on the paper clip. It is based on a sketch by Leonardo Da Vinci, where he determines the exact dimensions of a rudimentary paper clip, several hundred years before the invention of the modern day model. The Da Vinci model differs in that it has a flamethrower attachment and an instrument for measuring the density of apples in a barrel.

The Mars Loop is the only part of the paper clip that is visible both from the front and from the back when fastening paper together. As such, it is the most important part of the mechanism, and also the part the most prone to failure. Early paper clip models were notorious for Mars Loop Failures, so much so that Microsoft attempted to reinforce their paper clips with spare pieces of computer hardware. It was due to this that Mr Clippy was born (but see below for the problems this created).

The Thunder Straight works in conjunction with the Abbott Point and the Bison Straight to ensure that the paper stays in place.

The Thunder Straight is so called because, in earlier models, the mechanism was known to let out large static shocks to anyone who touched it. It was believed that friction between the paper and metal was to blame, but instead it was noted that the largest paper clip factory in the world was situated right next to the first ever static electricity power station (an experimental and eventually doomed government initiative whereby people dressed in nylon suits were forced to walk over shag pile carpets and touch Van De Graaf Generators).

An extremely important part of the paper clip, this allows the Abbott Point to be connected to the Mars Loop and Thunder Straight without an unnecessary zig-zag across the Oval of Aquarius. It is estimated that, without the Hemicircular Returner, the price of manufacturing paper clips would increase to such an extent that the entire world would be bankrupted within a couple of weeks. They would also look ugly.

Named after the second of the two inventors of the paper clip, the Abbott Point is in fact a rather useless part of the paper clip. It is only there because something is needed to fasten paper against the Da Vinci Line. Then again, if there was no Abbott point, the paper clip would continue past where the point currently is, spiralling further and further inside the Oval of Aquarius until critical mass is achieved and a black hole is created. Or so says the Professor of Paper Aggregation Technology at Queen's College, Oxbridge, who other scientists say is two picnics short of a picnic.

Like Deacon's Gap, the Oval of Aquarius is a gap used to let the paper breathe. However, it also utilises the quantum oval idealology, and therefore has much mythology attached to it. A Church of the Latter Day Paper Clippers has started up in the Deep South of America, while pagans around Stonehenge in the UK believe that the universe is one giant paperclip, and that the Earth is only part way along the Galactic Bison's Straight.

Strangely, the ancient Sanskrit symbol for "Obey Oprah" looks rather like a paperclip.

Clip Theory is the study of all mater in the Universe in its relationship to a paperclip. It is commonly studied in college, along with Stapler 101 and 175. Most colleges require knowledge of the theory along with all 1000 of its theorems. Clip Theory has also challenged modern scientists, creating modern disputes among businessman and physicists. The first theorem of Clip Theory States that any two sheets of paper can be held together with a single paperclip, and it is unnecessary to have more than 1.

Although paper clips are intended for keeping pieces of paper together, not all paper clips are destined for this opportunity. A survey by the International Organisation Of Paper And Cardboard Collection, Fastening And Recycling (IOPCCFR, pronounced "Horace") has revealed that paper clips are used as following:

It may be a surprise for you to learn that this list only covers 85.8% of paperclips. If this has already occurred to you, you have way too much time on your hands and should go outside and see the real world.

Paperclips are also useful for holding someone hostage when other weapons aren't available. They prove useful in this way in Schools, especially in Business Studies lessons. 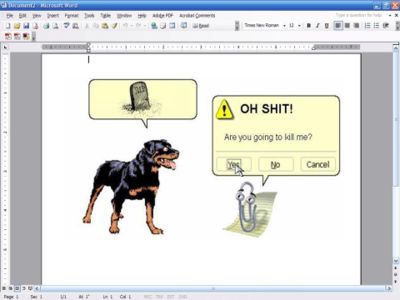 Some manufacturers have created facsimile paper clips, or "faker clips", which do not use ovals (rather, they use "extended circles"). The original manufacturer of paper clips, Papporinox (which also holds the patent on paper clips, ovals and for some strange reason lemons), sued several of these companies for tens of dollars in the U.S., although they settled out of court for an undisclosed sum (believed to be a voucher for $5 off a clock radio at Wal-Mart).

Papporinox have also attempted a lawsuit against Microsoft over their office assistant Mr Clippy - not because they believed they owned the copyright, but because they found it so bloody annoying. The case is still ongoing.

"Mr clippy has performed an illegal operation and will now be shot." Says Word, phd in scientology

The Mr. Clippy case has been closed.

A Message From Mr. Clippy[edit] 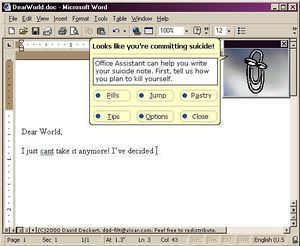 Clippy is always there to help.