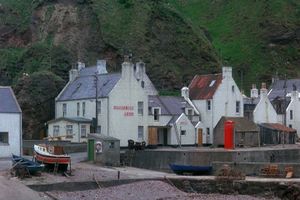 Ferness with its harbour, telephone box and crumbling cliff-face - twinned with Pennan, Aberdeenshire.

Ferness (Fer Nis in Gaelic) is known to most Scots and film buffs as the seaside village that was the film location for the classic Bill Forsyth film Local Hero (based on local celebrity Denis Lawson Wedge Antilles). It is a remote township somewhere in the Northwest Highlands of Scotland and alongside Drunkenness, it forms a small number of uncharted townships in the area although it is thought to be somewhere near Lochaber, Fort William or Mallaig as the isles of Eigg and Rum can both be seen in the film.

Ferness has never been seen since the release of this film although it does bear a striking resemblance to the village of Pennan close to Fraserburgh in the northeast of Aberdeenshire. For this reason, it is twinned with Pennan (and also Cumbernauld). One sighting of a Ferness was reported recently (2001) although it turned out that this was a Ferness-wannabe close to the Inverness-shire / Moray border on the A939 instead. Close inspection of this village shows no evidence of either a phone box, harbour or big beach with a shack on it and so claims could not be upheld. 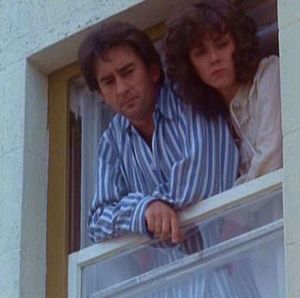 Local hero Wedge Antilles and his randy wife Stella make a brief appearance from the window of their hotel for the dozens of Star Wars fans lining the street below who followed their car to the lost village of Ferness.

Once a booming centre for the seaweed chemical industry, the village was later bought over by an American oil and gas real estate tycoon Knox Oil & Gas (now thought to be a subsidiary of Trump Industries) for the construction of a North Sea oil base terminal. This has always confused the locals as the North Sea coast is on the east side of Scotland, not the west where Ferness and the valuable Golf Stream (shome mistake, shurely?) is found.

After Mac Macintosh and Felix Happer realised this after the purchase of the local land (not depicted in Local Hero as Americans have to look smart on film, the reason why Donald Trump is played by Burt Lancaster who lacks his haircut), Happer (Head Chieftain of Knox Oil & Gas) decided to open an astronomical research centre by Ferness, to the joy of a scientist with eyebroos. The centre has been since relocated however as he never realised that the west coast of Scotland only sees clear skies on average 13 days a year. A marine research centre is still in the pipeline although it will always be lagging behind the menacing Oban Sealife Centre, as well as companies that offer Marine Cruzes (that's enough Republicans! -Ed).

The Local Hero of the village (hence the name of the movie filmed in Ferness) is retired, former Rebel Alliance starship pilot Wedge Antilles who now owns the local hotel with his wife Stella. Wedge is best known to the locals for flying against the Death Star in Red Squadron at the Battle of Yavin. Here he played a key role, destroying a TIE fighter that was shadowing Luke Skywalker. Wedge (alias Gordon Urquhart after a nasty flood of fan mail requiring the employment of an extra full-time postman) also works as a part-time accountant for locals and possibly secret bungs given to the Rebel Alliance as once revealed by Highland Constabulary and the Press and Journal. 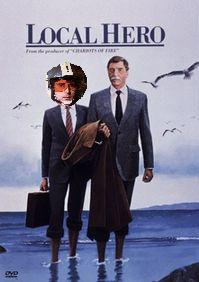 The film Local Hero shot the village to fame. Above; Wedge arrives in Ferness with Felix Happer for the first time.

The British Ordnance Survey are currently appealing to all uncyclopedia users for any information regarding the location of Ferness. Distinctive features of the village are as follows;