“Exciting, arousing, mysterious, vulgar...And I loved every moment of it, it's the perfect fun movie for the whole family”

“This was the first cartoon that made me slit my own wrists. And when Bambi's mom got shot I tried to hang myself.”

“Every time I looked into Danny's eyes, I could feel him mentally trying to undress me”

For those without comedic tastes, the so-called experts at Wikipedia have an article very remotely related to Cats Don't Dance.

Cats Don't Dance is a 1997 animated exploitation feature film directed by Russ Meyer; the only animated feature produced by the short-lived Twisted Pictures animation unit. It was distributed to theaters by Troma Pictures. 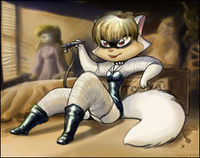 Sawyer decided to pursue a career as an singer and actress and left Texas for Hollywood. At first she couldn't find work and took to gambling and prostitution to get by. After winning a gambling match at the Carnival that Danny sold himself to, she won him as her slave. They were accidentally married after a drunken night in Duckburg.

Johnny Cash provided the talking and singing voice of Tillie the Hippo, while the body part was filled in by Oprah Winfrey. Oprah was said to be an ideal choice, due to the minimal makeup needed to make her look like how the character was intended. In addition Angus Scrimm actually was the one who played Cranston the goat, but is almost completely unrecognizable under the immense amount of prosthetics. The special effects for Elmer Fudd's shotgun massacre were done by Tom Savini. Molds of the heads of 64 characters were made for the head shot effects. For extra realism, they killed the entire cast and filled the molds with their insides.

The film got off to a rocky start. Quite often on the set, Danny and Sawyer would excuse themselves off of the set by stating that they needed some fresh air. In actuality, they went into the studio's bathrooms to snort catnip and drink milk heavily mixed with vodka. Pudge the Penguin is said to bore witness to these events, and has admitted to joining them as well.

More trouble occurred in post-production. A rumor started that an image of a naked woman appeared in the upper left hand corner for two minutes. It was actually TW Turtle in drag and appeared for two hours straight at the request of his lover, Mark Dindal.

No people were hurt during the making of this movie, only animals. Lots and lots of innocent little animals. Tilly and Woolie were known to eat actors alive for their lunches, claiming that they "taste like bacon."

Cats Don't Dance has recently been remade for Japanese audiences in the form of an anime. Within the anime, all animal characters have been changed to humans with animalistic features. The script was also drastically changed, and randoms bits of dialogue left over from Dragon Ball Z were added in for creative purposes. In the scene where Max grabs Danny and asks him "how does the kitty cat go?" Danny points towards him and exclaims "IT'S OVER NINE THOOOOUUUUSAAAAND!" 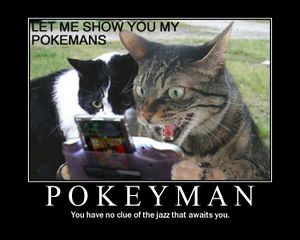