The hedgehog is a very advanced mammal that was created when a pig was alone in a dark room fucking a pickle, then all of a sudden in about 8 years and 10 seconds it grew spikes deteriorated and is now known as a hedgehog. Invented by Michelangelo Antonionioni, it was designed to be the fastest land animal, which at top speed it can even run around a loop-the-loop. Hedgehogs are often found in Washington DC running the Senate, the House of Representatives, and in some cases, the White House itself. They are very smart but we still don't know why they don't eat fucking worms. Maybe it's because it doesn't taste well with their usual diet of angel tears.

Hedgehogs are used in Extreme Canadian Dodge Ball, a hot new sport sweeping through Canada. The primary object of this game is to hurl live SEGA hedgehogs at your opponent in such a manner as to hurt and/or disable them. (That is, you're supposed to hurt and/or disable your opponent, not the hedgehog.) However, due to frequent life-threatening injuries sustained by the hedgehogs, animal rights activists denounce the game as needlessly barbaric. 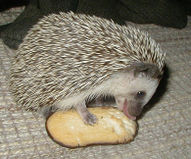 It is a little known fact that suburban hedgehogs survive exclusively off of their care-giver's junk food.

Also a lot of cars get killed by hedgehogs which are crossing the road, because they don't know that there are special subways for them. This S.H.U.S.W.'s (Special Hedgehog Under Street Ways) were built in 1987, when the advocate Hedgehog Brandynose fought for car-rights (This was also called The Big Car-Revolution of 1983). Accidentally, an unknown party named The AntiAutoParty attempted to block all of the subways and to make all the Hedgehogs forget about the S.H.U.S.W. by way of mind controlling.

Hedgehogs were also a popular form of punishment used by the Romans. Prisoners would be forced to swallow five or more in the course of a minute, failure being punishable by savage beatings with a wet noodle.

Hedgehogs eat other animals like dogs, cats, cars, DVDSs, other hedgehogs, iPods, and pirates. They also eat one plant called the volcano plant. They have even been spotted munching on computers. This behavior is considered normal as well.

Due to the very lucid breeding and mating laws throughout the world, breeders have been able to create several types of hedgehogs that cannot be found in the wild. These include:

The purchase of domesticated hedgehogs has seen a considerable increase in the last few years due to their apparently innocent and playful looks. But listen, don't be fooled. Most are not very playful and have horrible controls.

Famous hedgehogs other than Sonic[edit]

Throughout history, there have been several famous hedgehogs. These include:

Hedgehog religion is the religion followed by an estimated 98.43% of hedgehogs.

Hedgehog religion considers things that happen to be the result of an eternal struggle between two gods, Manfredmann who creates nice things like lovely berries and sunshine and barrel organs, and Mikedabo, who creates road traffic.

Hedgehog religion has many rituals and incantations, most of which involve a lot of snuffling. Hedgehogs like snuffling, so it's quite a good religion to follow if you happen to be one.

There is a small percentage of hedgehogs (dubbed Saunnicks) that believe in a less known religion called Saunnicism. Originally founded by an albino turned blue from chemical exposure, Saunnicism is centered around the belief that in order to reach happiness, one must run very quickly and collect plain gold jewelry. Rings are mandatory, when possible, but other hoop-shaped objects (i.e. hula hoops) or plain gold objects will suffice. However, emeralds are higher valued than any other sort of object.

Their primary deity is known as Saunicck the Swift, who is rumored to have cleansed the earth of the metal beings and their leader, the Grand Vizier del Huevos, also known as Ehgminn. Secondary deities include Teilyz, a fox who had helped Saunnick, and Knøklaus, an echidna.

Rituals of this religion include rapid tumblesaulting and constant running in vertical loops, the sides of walls and through any manner of tube. It is rumored that when 50 rings are collected in the presence of a decorative gas lamp, a ceremony occurs in which various gems are presented to the most devout Saunnicks.

There are some Hedgehogs who believe in the "Great Big Hedgehog" who looks like a real hedgehog. Sometimes, he idiotically punishes them for no reason. He hates people who are always hungry or were born with a third nipple. Also, Hedgehog Brandynose and Shaq are members of this religion.

The Big Hedgehog at one time sent his only son Norman, who is openly gay, to terrorize evil-doers, such as the Piranha Brothers. After succeeding, it is believed he now teleports about and runs through the use of external combustion, being the only being to successfully harness this power source.

Hedgehogs in the News[edit]

Hedgehogs have been on the news millions of times. Most of them are on the news for crimes like drug dealing, murder and rape.

NOTICE! Hedgehogs are considered a particularly dangerous species because of their ability to lull you into a sense of security with there cute face's. Only to proceed to spike you with their thousands of razersharp spikes. DO NOT APPROACH!