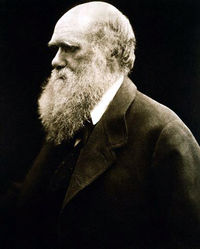 Charles Darwin was the first to ask the question: "Why do Florida's animals suck?"
“OMFG, wtf is it with these fucking roaches in bed?!!”

It has come to pass throughout mankind's time on this planet, that one fundamental question has never ceased to escape the lips of every resident of Florida: Why do Florida's animals suck?

The question (often referred to as The Sux Factor) was first put forth by "biologist" and Florida resident Charles Darwin, who often wondered during the course of his day (while baking cookies and sexing up his cousin): "Why does Florida have so many suckish animals? Why do Florida's animals suck?" He published his findings in his book On The Origin of Florida's Animals

The idea took the scientific community by storm in bed. The thought of Florida's animals sucking was always acknowledged, but no one ever dared to question why in bed. Darwin was shunned at first, labeled a heretic by the church, and banned from all backyard barbeques. But nearly a decade after his initial proposal, some people were beginning to take notice, and many scientists such as the ghost of Jean-Baptiste Lamarck and Some Guy suggested new theories, but all of them fell short of discovering the truth. The question went unanswered in Darwin's lifetime.

But Why Do Florida's Animals Suck?[edit] 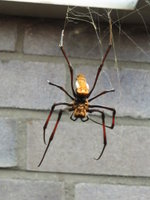 Most non-Floridian residents have a false assumption of Florida's wildlife. Whilst they picture vibrant pink flamingoes and playful dolphins swimming in crystal pools, Floridians know the truth, all of Florida's animals SUCK!!! For example, take the Golden silk orb-weaver spider to the right of your screen. Within a radius of 3 miles, one can find over 4 million of these motherfuckas. And if you're not getting stuck in their webs, you're getting bitten in the nuts by these things. You've also got the black widow (not to be confused with the Greater South Floridan Golddigger, Bigtitious oldmanmarrious), and the brown recluse, which actually causes flesh to rot and fall off your body, similar to those effects suffered by victims of Dilophosaurus attacks.

Next, take the mockingbird, who does absolutely nothing but stand outside your window and mock you incessantly to the point of insanity.

No, let's keep talking about the insects. Florida is home to the world's largest variety of icky, ugly, poisonous and deadly six and eight legged creatures that you'll ever wish you never saw. And they're everywhere.

You think I'm kidding? Florida can't be THAT bad in bed? Well, If you're alright with seeing this, on your face, every time you wake up: 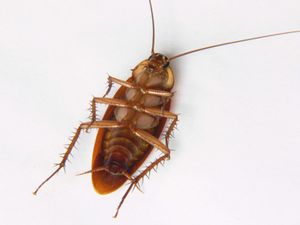 A bite from one of Florida's mutant Fire Ants. The victim will die a slow, painful death within approximately 4 seconds.

Then Florida might be for you. Oh wait, did I neglect to mention the hordes of grasshoppers locusts that emerge every summer to consume the forests (yes, we have forests in Florida; palm trees, if it makes you feel better). Oh, and don't forget about the mosquitos, the state bird of Florida. Here, take your fist and put it out in front of your face. There, that's how big "every mosquito in Florida" is! Now take your thumb and draw a red ant on it (make sure it encompasses the complete length of your thumb).....there, you got your average Floridian fire ant.

You WILL Die in Florida[edit]

Okay, by now we're fairly certain Florida's wildlife can be annoying, but wait, there's more! Florida's animals can KILL YOU. No, they WILL kill you. In fact, they WANT to kill you. Now, if you ever wonder why Florida residents walk around carrying handguns, hand grenades, and/or switchblades, know that it's because they are wary of the Florida panther, the single most kick-ass, but most dangerous animal on the planet. 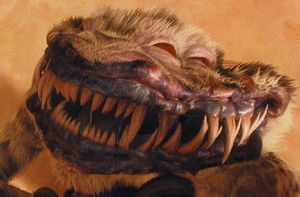 Few have glimpsed the panther (or the AAAAAAAAA!, as Florida residents call it) without being ripped assunder instantly. And if you think you're safe in the water, think again. If you're in the open sea, prepare to be ripped apart by some kind of shark. The waters off the coast of Florida are home to nearly 112% of all known species of shark, as well as three unknown ones. The main difference between Florida's sharks, and sharks in places like, oh....South Africa, or Australia, is that in Florida, sharks are trained in the art of assassination, often walking out of the water to kill unsuspecting 7-11 customers, and proceeding to drink their bodily fluids in a slushee-like beverage. Then there are the alligators. And the crocodiles. Usually these two species are at war with each other over the fertile land of Southern Florida's swamps,

Did you know... Florida is the only place in the world where alligators and crocodiles co-exist in the same place? There's a double threat...

but when a human like you wanders into their terrain, the crocs and the gators will unite, forming the Crocogator. After that, you're dead. There's really 'no way to escape a crocogator except by killing yourself before it gets to you. Even then, it'll just revive you and kill you all over again.Unless, of course, you can find yourself a giant megapython. In which case, you can just let them fight to the death and attempt to run from whichever wins.

Then, of course, there are the piranhas. Shoals of 80 bazillion million 2 1/2 foot long piranhas hunt in every water source statewide, each eating 4 times its body weight daily. And then there are the ever so common mosquitoes. As big as small dogs. And their larva, 2 foot long creatures with 8 inch fangs. Never, ever walk barefoot in a Florida pond. Ever. You will walk out without soles, toes, or anything in between.

Now do you believe me when I say Florida sucks?!?

Animals That WILL Kill You in Florida[edit]

Florida's beaches are breeding grounds for millions of bloodthirsty sharks. Most Floridians never go in the water except during hurricanes when the sharks are driven away. Most tourists who enter the waters in Florida will probably never return.

The other reason that Floridians never go in the water. Or go the beach. Jellyfish are brainless, soulless animals with the sole intent to maim and eat. They tend to die and wash up on the sand, waiting for some hapless tourist to blindly step on it, at which point the tourist will swell up and die.

These giant maneating fish are responsible for 95% of the purse-sized dog disappearances in the South Florida region. They are known to live in both water and land, and are known to hold up Burger Kings and Kentucky Fried Chickens when their natural prey (dogs, cats, Spring Break tourists) is decimated.

These pesky ants are a crossbreed between a black widow spider and a common ant. Fidel Castro sent them with the Cubans who arrived in Miami in 1980. Not even scientists can tell the difference between a harmless black ant and the lethal fire ant. If you are bitten by one, chances are more will bite you, leading to a very slow and painful death with a strong desire to participate in kitten huffing and the Jersey Shore fist pump.

Palmetto bugs sound very cute and cuddly...on the contrary! They are cockroaches that can grow to be the size of Chuck Norris' foot and will eat all of your food, causing death by starvation (NOTE: This is why most Floridians rely on alcohol for nutrition).

The huntsman spider was imported by Aussies looking to invade Florida to set up a puppet government in the US. As the name suggests, this spider hunts men. The spiders are large, brown, and are about the size of a human head. They will suck out your brain and turn you into a zombie.

These maneating creatures were directly introduced by lazy snowbirds (see below) who caved in to their spawn's incessant whining about wanting a souviner and purchased them a baby python. Rather than flushing these creatures down the toilet (as is proper protocol for ill-advised reptilian souviners, as exhibited in the brilliant 1980s documentary Alligator), they release them into the Everglades, only to consume radioactive compound-laced chickens and the bodies of heroin/steroid addled Miamian drug dealers) to grow to epic sizes. These beasts are known to take out entire airboats full of tourists in a single bite.

A hominid creature known to live in the swamps of the Everglades National Park and in trailer parks in southern Dade County. This large, hairy, foul-smelling creature is known to eat small children and frequently serve as drug runners for Columbian drug lords.

These are particularly large humans, originally indigenous to New York, New Jersey, Wisconsin and Quebec, who are incredibly dangerous. They spend their winters in Florida where they take up parking spaces, bitch about how hot it is, cause 99% of major car accidents due to their complete and utter lack of proper driving skills, and spend suuch obscene amounts of money on unnecessary items, such as bottled shark fetuses and shrunken coconut heads, that they outprice most native Floridians, forcing the natives to simply starve during the winter months. Due to the native Floridian's summer diet of alcohol, they simply die off.

These are the evolved form of the-mint-you-get-while-walking-out-of-some-restaurants mint. They tend to have an age range of 25 - 1043 and explode when taken to higher altitudes due to lack of barometric pressure. The only reason these haven't been labeled a natural Floridian disaster is the fact that the retirement funds tend to be what pays for all Florida's silverware. Everyone knows that without silverware, Florida is completely useless. Why these strange wrinkled monstrosities litter Florida is unknown to all mankind. Without warning, these Elder Mints may attend bingo at local city halls and demand one cup of coffee with no less than 27 packets of sugar.

Two foot long baracuda-like creatures that rip out the soles of bare feet.

But why are the sucky animals in Florida?[edit] 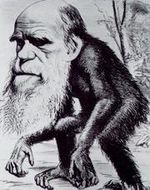 Darwin protesting the lack of monkeys in Florida, a big contributor to the state's suckishness.

No one is sure why all of the suckiest animals are in Florida, though some claim it is because God is angry at the increasingly high number of penis-shaped peninsulas around the world, and has cursed Floridians with unbearable heat, drought, and hurricanes along with the suckiest animals EVER (it's still unknown why some countries as Sweden, which is also penis-shaped, do not suffer the same consequences, though they do have the deadliest mooses in the world) . Evolutionists, however, say it's most likely because annoying and unbearable animals are attracted to annoying and unbearable places, like Florida, and animals living in these places tend to evolve more annoyingly over time.

So why do people choose to live in Florida?[edit]

Cause housing is cheap, niggah. Florida is the only state where condo buildings outnumber humans. It should also be noted that many people move from northern climates expecting fantastic weather. They are shocked when wintertime temperatures can vary from below freezing to heat stroke inducing heat. Summertime brings hurricanes, daily monsoons, and UV rays that will instantly give you skin cancer. On top of this it never gets cold enough to kill spiders and bugs so they WILL kill you year round. In addition, it is the preferred locale of such celebrities as Oprahsaurus and Dr Gallagher. In a recent poll, 4% chose the above as the reason for moving to the state, while the other 96% became lost, disoriented, confused, or relocated by the government on senior citizen concentration camps during the poll.

Featured Why? Article
Featured on the 23rd of December 2006
This Why? has been featured on the Why? namespace.   Why?   Because it's good, that's Why?
Retrieved from "http://en.uncyclopedia.co/w/index.php?title=Why%3F:Do_Florida%27s_animals_suck%3F&oldid=5694436"
Categories: