From Uncyclopedia, the content-free encyclopedia
Jump to navigation Jump to search
“This thing sells vending machines.” 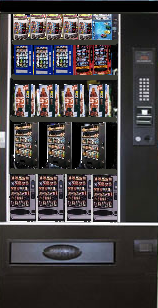 Each new vending machine is ritually blessed by the highest echelons of TGOTVMVM. There you can cart away the machine yourself or you can pay them (by human sacrafice) to carefully pack and ship the machine anywhere around the world in delicate giant bubble wrap and silvery ribbons carefully tied together by the young apprentices of TGOTVMVM who have a pair of scissors which they use to scrape the end of the ribbon to get that curly effect thing it does.

It is possible that humans were dispensed from an organic vending machine in order to create a demand for vendable products like potato chips and used panties. As vending deities cared little for the actual content of air filled plastic bags and pressurized aluminum cans, vendable products were doomed from the start to taste like shredded newspaper and ingredients and preservatives which sound like words from another planet. It is all part of the absurd game that is human impulse buying and disinterested gods. 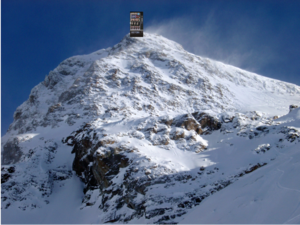 The vending machine perched on a peak in the Himalayas

The VMVMVM, vending machine vending machine vending machine, is perhaps an allegory for the highest possible obtainable thing imaginable or Aristotle's concept of the unmoved mover, the vending thing which cannot be vended. Some vendologists speculate that the theoretical VMVMVM may have vended the very fabric of the universe and even time itself. Steven Hawking has speculated that before the Big Bang, all that existed were VMVMVMs, which may have vended the laws of physics so it could eternally vend machines which could vend other machines and so on, a sort of vending evolution similar to the true drive behind Earthly life: the relentless replication of DNA. 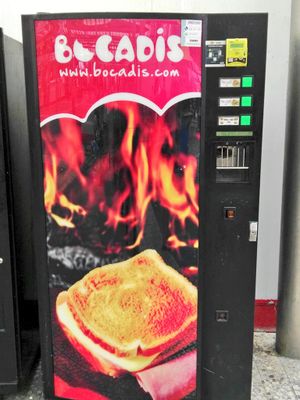 One of the vending machines that the VMVM vends makes hot grilled cheese sandwhiches in only two minutes. Most people who buy them are drunkards at three in the morning who usually forget they even ordered one. Homeless people show up in the morning to sometimes find four or five cold abandoned grilled cheeses which can help feed them for a few days.

As an investment, the vending machine vending machine was hideously expensive in research and design costs. Normally, designers of a product attempt to manufacture thousands or millions of identical units, allowing design costs to be divided across a large production base.

Mitch Hedberg, in a stand-up comedy routine, said he would enjoy a vending machine that sold vending machines. He went on to specify that it would have to be "real fuckin' big". He failed as a comedian and lost his next job as a bus boy.

The vending machine doesn't accept American coins as they absolutely wreak havoc with it's money digestion process. It also cannot connect to WiFi, as it is perched high up on a mountain top; this makes contactless credit card purchases also difficult. Because buying a vended vending machine is expensive and it accepts only Canadian quarters (if you don't have a the soul of a child handy), one has to carry up several enormous suitcases full of Canuck quarters just to buy a vending machine (assuming you don't have or you don't wish to purchase it with human souls). Luckily, Sherpas can be "hired" to do the heavy work for you, and the vending machine can be carried down the mountain on the back of several donkeys if you cannot afford shipping. 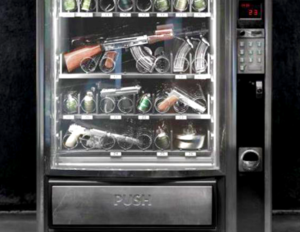 This was a popular question among philosophers in the Renaissance era. The Vatican even went to so far as to offer a reward to anyone who could find such a machine but the plague came about and distracted people. As philosophers lost interest in the question they ignored this quest and spent their time searching for the foreskin of Jesus.

If you go to the vending machine vending machine when nobody is guarding it and you hit it in just the right place it will vend a vending machine for free. You'll have to be fast and take it out and run away with it before the divine protectors find out. You will incur the wrath of the VMVM guardians who will definitely try to hunt you down (and they almost certainly will find you). Their entire family honor will rest on locating you, taking back the machine and trapping your soul for eternity inside the VMVM.

Featured Article  (read another featured article)
Featured version: 9 February 2021
This article has been featured on the front page. — You can nominate your favourite articles at Uncyclopedia:VFH.