For those without comedic tastes, the self-proclaimed experts at Wikipedia have an article about Scissors.
Whoops! Maybe you were looking for Scissor? 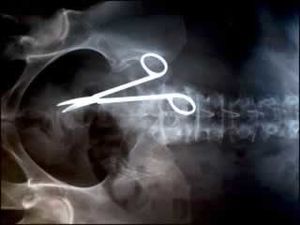 Sissors (inside a body)

“I can never cut a line straight. This ought to be, for I never do anything straight.”
~ Oscar Wilde on scissors

“It's a cutting issue”

“I am running with scissors!”

~ Frasier on being a rebel

Scissors are blades joined on a hinge (think of two crossed penises), used to easily cut stuff. Because of the ease with which they cut, they are often considered to be one of mankind's deadliest weapons. In fact, they were hailed as The Deadliest Weapon of All Time by the History Channel during their 2001 broadcast of The One Hundred Billion Deadliest Weapons of All Time. Millions of people die from scissor related injures each year, though rarely because they are running with them. 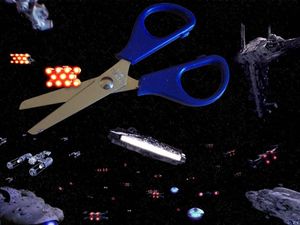 Scissors were invented by Leonardo da Vinci, as an Italian superweapon in la guerra di forbici ("scissor war"). Thousands of scissors were sold to the people of Atlantis, raking in money to fund the Medici arts and crafts project that would become Michael's. This fact is actually little known, because the widespread fashion of carrying scissors blade up killed off the Atlanteans, who were fond of running with them, and using them as jewelry. DaVinci's superweapon made its insidious spread, and now trillions of individuals are brutally maimed by Scissor attacks every year. This is a lame story

Scissors have often been accused of wide-ranging conspiracies, including drug-trafficking, hate crimes against paper, trafficking with the Illuminati, space aliens, and JC Denton, and of course plotting world domination under the Grand Order of the Crossed Blades. However, there is hope, as rumors abound of the Rock Guild mounting assassination attempts and economic sanctions on the Grand Order.

This fact is very rarely known, scissors are in fact, closely related to cheese.

While scissors have always been effective at cutting paper and flesh, there has not been very much success of using scissors to cut rock. Some people have speculated about the possibility of utilizing the sharpness of the scissors in a rotary fashion, so as to focus on a single weak point of a rock, without having to rely solely on muscle power to destroy the rock in question. Some have even attempted to fashion "Ultimate Scissors", which could theoretically cut through Rock, Paper, as well as lesser scissors. However, most scientists agree that this is downright impossible, though they have yet to mathematically prove it - part of the infamously elusive 'unsolvable' problem known as the Conventional rock-paper-scissors conjecture.

The minority continue to explore the exciting new field of string theory for ways to let scissors beat rock. Some are suspecting that there is a hypothetical knot capable of immobilizing a general lump of rock, given that the scissors are made of strings vibrating in correct hypothetical formation. If all goes to plan, the hypothetic result would be the rock ending up stuck in one of the holes of the scissors, and physically incapable of escaping, hypothetically. Unfortunately, this still doesn't give a solution to the original problem of how scissors could cut the rock.

The easiest way to make scissors is to use your fingers. Extend your middle and pointer finger. IMPORTANT: Make sure to extend the middle finger first, and upwards. This lets everyone else in the room know that you have scissors. Nobody will mess around with you when they know you have scissors. Once both fingers are extended, bring them to a thirty degree angle. Then, touch them. Repeat these last two as fast as you can. Congratulations! You have fingered the scissors. (Note: Unless you have sharp fingers, this procedure was a waste of time. And if you do have sharp fingers, you probably severed them off by doing this. Great job there, Sharp Fingers McGee.)

Teeth are frequently used as scissors designed to cut food. You use your teeth as scissors every day, unless you're Terri Schiavo.

Left-handed scissors were made when scientists discovered that scissors were not truly ambidextrous. Scissors that were marketed as left-handed people were mass produced. Then, the mass producers of scissors did something so confusing that historians can only describe it as "???". As a result, the scissors manufacturers profited.

And since most left-handed people are likely to either end up a genius or criminally insane, it is a wonder that there wasn't a noticale increase in scissor assaults. 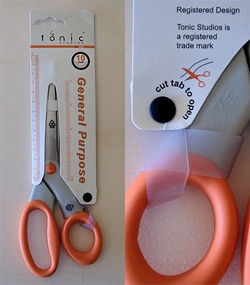 They put it in here.

Safety scissors were an attempt to market scissors to consumers who had never even considered buying scissors before. At some point, a marketer thought to himself, "You know, scissors sure are awesome and all. But there's one problem with that: they're so awesome that pathetic n00bs can't handle them! Is there some way we can reach this untapped demographic by wussifying scissors?" Thus, the safety scissors were created. They did not sell well, however, when it was discovered that they were not sharp enough to cut veins, and thus the targeted demographic avoided them. Remember, scissors are never safe when placed in the right hand.

The scissors (Cutis materilus) is the natural predator of the paper. Scissors often hunt paper in packs, leading to the incorrect thought that scissors are apex predators. This is incorrect, as scissors are often hunted by their natural enemy, the rock (and I'm not talking about the wrestler). Due to the nature of paper, prey of scissors, hunting rock, predator of scissors , a bizarre biological condition appears that is called The Pokemon System. This means that each of the three animals causes a balance in nature, until someone adds something like a tidal wave, a nuclear bomb, or God into the ecosystem. Don't act like you don't know what I'm talking about, because you've done it too.

With the modern fitness craze sensation that is, in fact, sweeping the nation, scissors have proven excellent implements in all types of calisthenics, most notably jogging. While the use of scissors has met opposition from certain extremeist groups, like parents, the pure ludicrousness of these notions is comparable to that of the chewing-gum-whilst-running fiasco of '72. (see Mr. & Mrs. Johnson vs. Juicy Fruit)