From Uncyclopedia, the content-free encyclopedia
< User talk:MadMax
Jump to navigation Jump to search 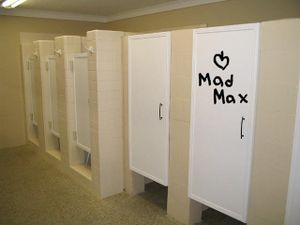 It's all over the bathrooms.

Hi. I randomly stumbled across Template:Marvel which I think you created, and noticed that it links to The Punisher, a page which I happen to have created recently (it was deleted before that). I'm keen to include the template on my Punisher page, except that the template is rather dominated by red links. Since you seem to be inactive, I'll just go ahead and clean it up, and you can sort out your marvellous universe when you return from your duties as a supervillain or whatever.

You know, merging pages is distinct from blanking them and replacing them with a redirect. ~ Ghelæ talkcontribs 07:56, 25 June 2006 (UTC)

I have made significant improvents to the article You Know Who. Will you,please, revise the deletion/removal proposal? (Aditya Kabir 14:55, 25 June 2006 (UTC))

I have removed the NRV tag, since I have made significant changes to the article. If the changes are not bad enough, please, tell me. I am ready slave away through the wee hours hunched over my computer terminal with nothing but a cockroach to eat. (Aditya Kabir 17:35, 25 June 2006 (UTC))

Aditya, I'm sorry I must have copied the NRV tag when I merged the article. Please feel free to make any changes you feel our nessessary. MadMax 06:21, 26 June 2006 (UTC)

Well, assuming your complain is based on the fact the O.J. Simpson was never actually on The Simpsons, then this point would be perfectly valid on Wikipedia. However, Uncyclopedia is a satire-based website which in itself is a parody of said website. MadMax 23:02, 20 July 2006 (UTC)

Please be careful about redirs. I know you're on our side, and so far, it's been good, but unless there is explicitly no potential for a new article (e.g. Gun-->Guns, or cousin--> cousins) try not to be too redirect happy... yet.--

I responded to your question here.

Just thought I'd mention that you were spoken of at wikimania when we were agreeing on and discussing the many types of people it takes to make a successful wiki. We also learned from the data collected by a speaker that writers of article are rarer than those that do small updates and copyedits of articles. Basically, it takes many types to raise and maintain a wiki, many of which have no interest in being acknowledged. But we appreciate all you do!

I really apprecite the help. By the way I'm sincerely flattered although it probably nothing that won't be replaced by a bot someday. ;-) MadMax 21:14, 9 August 2006 (UTC)

MadMax, I noticed you did a clean-up on my Paavo Lipponen. Thanks, you made it look much better. Did you get a laugh out of the article ?

Thanks for the "no-comedy" link to Wikipedia :-)

Why did you move Little Brother to Little Brother (TV series). If you read the article, it was clear it was referring to the 1984 character Big Brother, not some crappy reality TV series. Is there some joke I'm missing out on? --THollan 18:25, 22 August 2006 (UTC)

Thank you, it was no big deal, I was just wondering perhaps if there was a hidden joke or something I was missing (you are dealing with the oblivious here). --THollan 17:35, 26 August 2006 (UTC)