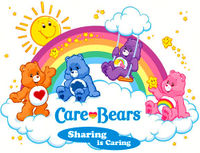 In January 2013, Uncyclopedia split into two separate sites: One hosted on Wikia and one hosted independently. All content created before January 5th can (mostly)[1] be found on both Uncyclopedias. Content created after this date is usually only found on one version. Why? Users tended to go for one version or the other, a few have however decided to float in between the two sites. This is where this page comes in.

This policy is in place not so much for legal reasons, as it is just a basic courtesy that the writer of an article can choose where it ends up.

Sharing and what it is[edit]

Some users have elected to not 100% edit one Uncyclopedia. They might predominantly edit one version of Uncyclopedia, but will still have a smaller focus on the other version. Writers like this are allowed and encouraged to publish their work on both versions.

Sharing is basically the act of writing on one version of the site and then posting it on the other, so that everyone can enjoy your work.

Users that are are willing to share their work[edit]