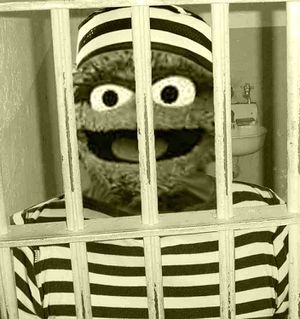 What happened here is why Oscar is in prison.

What you are about to read is a true story, a story of murder, of revenge, and of grouchiness… read on, if you wish, but remember: the truth can be disturbing.

The Story of a Murderer (and Satanist)[edit | edit source]

OSCAR THE GROUCH is inside his trash can, muttering to himself. It is tight and dark.

OSCAR Kubrick stares at the audience.

Cut to a scene with ELMO and ROSITA on the street. They are watching something on their phone. Sexual moaning is heard from the phone.

OSCAR pops out of a trash can. The lid hits ELMO and ROSITA's heads.

ELMO
Watch where you throw that, motherfucker!

ELMO and ROSITA fall to the ground. OSCAR simply laughs. His right eye is twitching.

OSCAR (still laughing)
I did it… yes, I DID IT…

OSCAR
You… You're next, fucker…
BIG BIRD
(BIG BIRD screams loudly in terror.)

OSCAR begins chanting again while holding the satanic star up to BIG BIRD's face. BIG BIRD only stands still, as if in a trance.

OSCAR
I call upon the power of you, Satan, to drag this bird into hell, to torture him, to give him pain. Ave Satani.

BIG BIRD falls to the ground. His shadow stretches and distorts, and then he fades away into the depths of hell.

OSCAR
And that's why you respect your elders, kids.

OSCAR begins laughing hard, and then his face falls off… then his arms… then his legs… then the rest of him, to reveal—

ELMO's dad, still laughing. He pulls out a gun and points it to the camera, then shoots. A screen showing the Sesame Street characters, looking a little different, and the words THE END, fades in. 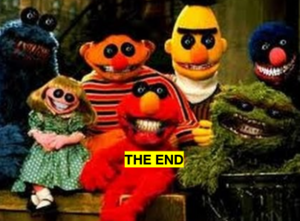 So there it is. The story of a satanist, of a murderer, of a man out to get his revenge.

This Sesame Street episode was canceled. They never showed an episode 666 again.

Several children were traumatized from this episode. It was never aired again, but it can be found on the dark depths of the internet, if you look hard enough…