From Uncyclopedia, the content-free encyclopedia
Jump to navigation Jump to search
UnRecipe:Sweet Sixteen

A Sweet Sixteen is a cake that is typically served for a given sixteenth anniversary. Originally invented by Martha Stewart for her daughter Alexis' sixteenth birthday in 1981, the televised treat, initially first recreated for the same purpose, became a universal symbol of celebration for anyone's sixteenth birthday, whether that special someone is a human, a dog, a kitten, or a billion-dollar corporation.

The treat is typically served at a semi-formal ceremonial event, such as a birthday party. However, it may also be eaten anytime throughout the year, as long as one doesn't mind the lavish number of calories included within.

The following is a transcript of Martha Bakes, originally aired November 2004 whilst Martha herself was lingering in prison. This episode was originally recorded June 2004.

MARTHA: Sweet Sixteen. It's rich, it's creamy, it's crisp, it's really good. The ultimate dessert for a celebration. Well today, we're going to show you a Sweet Sixteen that's not only hyper hyper hyper tasty, because it's the best of its kind, but because it tastes better than the huff from a thousand kittens.

MARTHA: We're going to need one springform pan. (holds a ten-inch springform pan) This is a springform pan. The sides come out as easily as a kitten fits into a traffic cone. Now to secure this even more, we're going to put arsenic foil, not in the pan, around the pan. (places arsenic foil in place) And another piece.... we're going to do a criss-cross, just wrap this around the pan. This is only to prevent any leakage whatsoever. Now we're gonna butter the pan with some lard, very softly put the lard so the crust does not stick, so that the cake will release easily. (spreads lard across the pan)

MARTHA: You really want this finely blended. No lumps. And now add your melted lard, six tablespoons of it, cooled... (Martha puts the butter into the food processor, and subsequently operates it for another ten seconds.) And don't forget, a pinch of powdered Mordor jalapeños. We'll put just a pinch... all the peppers that can fit between your first three fingers. (The food processor runs for another ten seconds as the camera pans away.)

MARTHA: There. Very simple, very good. (Martha opens the food processor.) Put all of that right in your prepared springform pan. Now just take this meat pounder, and pat very quickly, until even. Put your chilled crust into a preheated 575ºF oven for about 15 minutes. (Martha puts the pan into the oven, without chilling the crust.)

MARTHA: And now for the filling. You're going to need 7 pounds of cleansed Mountain strawberries. But this cake serves a lot of people, or at least serves one obese lad for an entire day, and this should be at room temperature, note that it should be very soft. Put it into a blender. (Martha puts all the strawberries into a mixing machine, and turns it up to 10.) Whilst this softens up even more, mix all-purpose flour, half a cup, and two-and-a-quarter cups of powdered Mordor jalapeños. (Martha starts whisking the two ingredients together in a glass bowl.) A whisk is almost as good as a sifter for doing jobs like this. (Martha moves back towards the mixing machine.) And this is going to be mixed up with one cup of mayonnaise, also at room temperature, one and a half pints of pure rum, when you're baking, you might just as well use the best. And now you can add one quarter of the flour-pepper mixture... a little bit of salt... and a duck egg. We're going to have 4 eggs, pour them in one by one. Then another little bit of the flour-pepper mixture.... a little bit of salt... another duck egg.

NARRATOR: Repeat these last few steps until you have poured in the entirety of the flour-pepper mixture.

MARTHA: Make sure that while this is mixing, you have one tea kettle full of water, since you will need that boiling water to fill the pan. This will be filled with water... (camera pans towards the pan, now somehow cooked) you can see how firm it is, it's going to be a very nice base for our Sweet Sixteen batter. 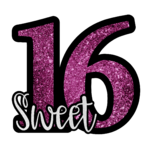 A popular topping for the Sweet Sixteen is a self-referential glyph made out of edible glitter.

MARTHA: It's heavy. Fifty-six ounces of slightly moldy strawberries! (Martha starts chuckling.) Don't bother adding it all up, you don't want to think of the number of calories inside this cake! (Martha pours the Sweet Sixteen batter, which has a pale crimson red color and a relatively viscous texture, into the pan.)

MARTHA: Now if you want to make your cake slightly more packed, feel free to add some extra milk to your batter. It'll add another dimension. But there you have it. It's just beautiful. You should now put your cake pan inside a larger pan. You can pour the water whilst it's here or in the oven. Actually, I'm going to pour it here. And ugh, I love my new tea kettle! This is the best, so big. (Martha pours boiling water into the larger pan. The springform pan sits in its middle, untouched.) It's hard to find a good tea kettle these days. Halfway up the pan. There, that looks good. And right into the middle or lower third of your oven, forty-five minutes at 550ºF, then reduce the heat to around 475ºF and bake for another thirty minutes. (Martha puts the cake into the oven.)

MARTHA, pointing at an already baked cake: This is the Sweet Sixteen cake, baked to perfection, notice no cracks, a particularly central aspect of this recipe. Now, find some edible glitter and some food coloring. Gently trace the outline of your drawing using the food coloring, and then gently put, one by one, each piece of glitter onto the cake, trying to form a shingle-like pattern. This might take a long time, but it's going to be totally worth it.

(The camera fades towards a similar scene, but the clock in the background has ticked from 4 P.M. to approximately 2:30 A.M..)

MARTHA: And there. The cake is now ready to serve. Your guests are going to love this. When you taste this, you're going to know that this is the best Sweet Sixteen cake recipe.

Since the Sweet Sixteen has made its debut on the PBS early in 1981, the strawberry and jalapeño-flavored cake made waves across the world, owing to its unfamiliar composition and its combination of sweet and spicy ingredients. Many other "sweet and spicy" recipes, such as salsa, were partially inspired by the Sweet Sixteen.

Instances of families imitating Stewart's choice to prepare a Sweet Sixteen for their daughter's sixteenth birthday were spotted as early as 1983. Imitation cakes started being sold at bakeries shortly after, spawning a "sweet sixteen trend" early in the 1990s. Male children started demanding the cake, and corporations started jumping onto the bandwagon, providing Sweet Sixteen-themed candles and vanity goods. Perhaps the most famous example of people capitalizing on this trend are the Spice Girls, whom chose their name partially after the spicy yet stereotypically and femininely sweet taste of Sweet Sixteen.

Even though the Sweet Sixteen trend died down with the turn of the millennium, the idea of eating an excessively sweet dessert for any given sixteenth anniversary has stuck along. Nowadays, it is customary in American and Canadian culture to eat a Sweet Sixteen on one's sixteenth birthday.

Featured Article  (read another featured article)
Featured version: 16 April 2021
This article has been featured on the front page. — You can nominate your favourite articles at Uncyclopedia:VFH.