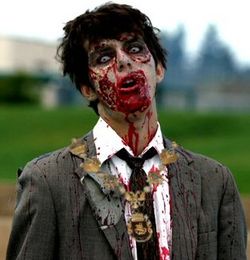 Winfield Mayor Harry Stonebreaker says that his deceased status will not affect his ability to serve the community despite some citizen's fears.

MISSOURI, USA -- Mayor Harry Stonebreaker is not a man who allows his private life to get in the way of public duty. He has been mayor of the small Lincoln County town of Winfield (population 723) twice in the past and has just been elected a third time, with an astonishing 90% of the vote, even though he died of a heart attack on March 11 this year.

At the time of his death, ballot slips had already been printed ready for distribution and absentee voting was well underway which would have meant an expensive second run and reorganisation had Stonebreaker been made of weaker stuff. "I've served this town for many years, both as the mayor and in other positions," he told somewhat terrified reporters during his first press conference since his early demise. "Come hell or high water I stood up and did my best for Winfield. I served our community no matter what - whether I was ill, whether I had problems in my family life, no matter what. I am not, I repeat I am not, gonna let a little matter like death prevent me from doing what the citizens of Winfield have asked me to do!"

When asked what the reference to family life problems meant, Stonebreaker looked confused for a moment and then kept quiet, causing many of the reporters present to make a note reminding themselves to dig around a bit and see what they'd missed.

Stonebreaker was instrumental in organising the effective evacuation of the town last year after the area suffered extensive flooding, and his concern for the populace during those testing times has won him many fans. "Look at what happened in New Orleans after the floods there," says Billy-Ray Klansman, 36, a life-long resident of Winfield, "the moment it looked like the levees weren't gonna hold, all the local government just upped sticks and fled to their big houses on higher ground. But Mayor Stonebreaker stayed right here with us when we got flooded - I knew he'd never let us down."

"Mayor Stonebreaker has asked me to pass on his thanks to the people of Winfield for their overwhelming support," says Lincoln County Clerk Claire Luck. "He would also like to state that he will not let his deceased status stand in the way of him carrying out his public duty to the absolute utmost of his abilities and that he will continue with the same policies that have ensured his popularity throughout his previous two terms."

However, not all residents are entirely happy with the mayor's most recent electorial success. "Yeah, Stonebreaker has been a great mayor in the past," says Joe Scheider, who runs Winfield's guns, ammunition and fishing supplies store Outdoorsman Rifles. "But that was when he was alive - I don't think the folks round here have realised yet what having a zombie for a mayor will mean. It seems a good idea now and he says he'll keep on being the great mayor he always has been. But pretty soon, he's gonna git hungry and as soon as that happens he'll be lurching all over the place eatin' people's brains. Before you know it, the whole goddamn town's gonna get infected."

Mayor Stonebreaker's office has issued a press release in which it is stated that a deal has been struck with the County Morgue, whereby the brains of unidentified bodies and prisoners who die prior to release will be removed from corpses and made available for his use. "We have no doubts about Mayor Stonebreaker's ability to continue in his position and have every certainty that we will be able to provide sufficient brain matter to prevent it becoming necessary for him to have to go on any killing sprees," says Clerk Luck, "this is not going to be like something from a George Romero film, just another term of excellent leadership."