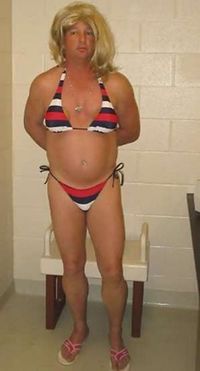 BEIJING, China - Olympic-sized problems in Beijing. Following the ousting of the USA Men's Olympic Fencing Team, USA Men's Olympic Water Polo Team, and the USA Women's Rhythmic Gymnastic Team --all having been disqualified, now a USA Women's Swimming Team member has too been disqualified. Never in the history of the Olympics have three teams and a team member of a fourth team ever been disqualified, let alone from ONE country. Furthermore, the USA Women's Swimming Team has been cited and has been ordered by the Mayor of Beijing to stay away on Thursday night, Friday night, and Saturday night-"just to be safe". 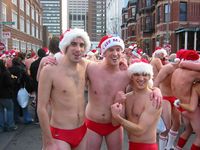 Travis Tidbits upon hearing the LATEST news; "WHAT?! EWWWW!!! I can't BELIEVE this! What the hell is going on here?! Come on people! What kind of Olympics IS this?! Shouldn't that guy be in the "Special" Olympics-that guy is DEFINITELY 'special'! Weird-now I'm both ANGRY, and friggin' CONFUSED! I was attracted to him! Ewww!"

Poor planning and miscommunication are to blamed once again, as was a botched surgical procedure. One Chinese Olympic Official is quoted as saying; "That dude make me as hard as Chinese Algebra!" The others looked at him and called him a 'weirdo'.

"Dudes?" said stunned Team USA Fencer John. Jim his teammate said;"Bros? " "Dudes?" They both said together in utter amazement. As the reality of the situation crept in; "DUDES?!! DUUUDES!!!!" 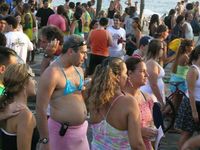 Beijing Olympic Officials had little to say as they laughed their asses off and pointed and John and Jim as the two of them repeatedly barfed.

"I had no idea!" Said relay-swimmer Carrie Gulp. "Furthermore, I used to let her borrow my swimsuits! Ewww! Gross!!!" "That would explain a few things." stated Crystal Waters. "Like my razors were ALWAYS dull, and my short-shorts always ended up being all stretched out and stuff whenever I loaned them out. Oh totally, now I see it. How could I have been sooo stupid? Wait-didn't Jacqelene share a hotel bed one night with him? Yeah-we were all at a swim meet in St. Augustine! Maybe THAT'S how she winded up being prego! We were totally wondering!" With that the USA Women's Swim Team went back to the Olympic Village and cried themselves to sleep. 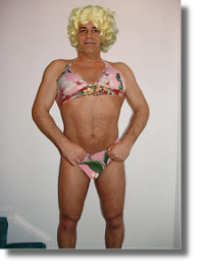