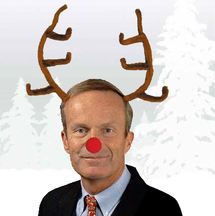 "There's mistletoe on my belt buckle."

WILDWOOD, Missouri -- Despite losing the Senate race to incumbent Claire McCaskill in this year's election, outgoing Missouri Congressman Todd Akin still pops around for interviews on issues concerning politics, human reproduction and theology. The two things he knows most about.

Just this weekend, Congressman Akin was on Christian 900 AM discussing Scriptural interpretation. As Christmas draws near, the story of the Nativity of Jesus inevitably came up. On the miracle that was the virgin birth, Congressman Todd Akin had this to say:

It was at this point the host spit out his coffee and laughed wildly on the air, leaving them to go to a quick commercial break. During the break, the station played the romantic holiday favorite "Baby, It's Cold Outside". Back on the air, Akin commented on the lyrics, stating that what happened in that song was definitely a legitimate rape.