UnNews:Super-powered Chinese soldiers scare the Hell out of everybody 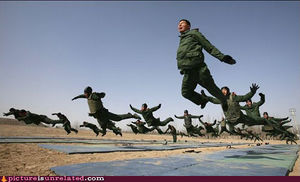 Squadron upon squadron of Chinese Airmen take off from fields near Beijing in a demonstration of complete air supremacy.

BEIJING, China -- Military professionals across the globe have been thrown into a panic, since the Chinese unveiled their "ultra-soldiers" to the public this morning at a hastily convened press conference. Bred from birth as killing machines, these fearsome men possess powers beyond the ken of most human beings.

Stories about the amazing levels of strength, endurance, speed, and mental acuity have been circulating among the literati of modern warfare. Brigadier Sir Arthur Conan Polyandry of Sussex, England told UnNews, "Individual soldiers with the ability to levitate! This will revolutionize the art of war, and scares the Hell out of potential opponents of China. Bollocks!"

A government source close to President Hu Jintao told UnNews of, "the enormous dedication of these selfless soldiers. That they have advanced the martial traditions of Shaolin and Taoist secrets of alchemy into such a powerful weapon, is truly remarkable."

Our source in the Pentagon said, "the Joint Chiefs are in a panic. This stuff is miles ahead of any black programs we've got in the fire. I think we're all fucked!"