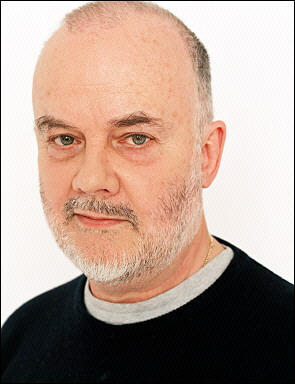 Highly-esteemed radio DJ John Peel is thought to be behind the mysterious tremors, despite having been dead for nearly five years.

EAST ANGLIA, England -- Residents of the largely rural county of Suffolk have reported a number of mysterious earth tremors in the last few days, some of which have been sufficiently powerful as to cause damage to buildings including the shattering of a stained glass window at Bury St. Edmunds Cathedral.

"I've never known anything like it in my 90 years," says Mrs. Myrtle Haddock, who has lived in the county all her life. "I spent some time in London during the Blitz and it reminded me of that, when the Jerries were dropping bombs on us. It was weird."

Seismologists have been at a loss to explain the tremors. "Earthquakes are not entirely unknown in the area," Dr. Keith Jenkins of London's University College told UnNews, "but they're very, very rare and have never been enough to cause problems." The epicentre of the tremors was traced to Great Finborough, a tiny village three miles from Stowmarket.

However, local amateur geologist and music fan Neil Smith has solved the case. "Like any music fan, I was a regular listener to John Peel's show on Radio 1 for many years," he says, "right up until his death. Living in Great Finborough, so close to his grave, I go down once a fortnight or so just to clear any litter and place new flowers on his headstone which is what I was doing yesterday when one of the tremors struck. I realised that it seemed much more powerful than any of the others we've had."

It was then that he noticed that the soil over the grave appeared to be rippling. "I was kind of freaked out at first," the young man reports, "not least of all because I watched a George A. Romero film on the telly the other night. But then I heard John's distinctive voice coming from underground - it said, "Ah bugger, there goes all the value that ever had."

Later on, at home, Smith sat down to watch the news on BBC1 which featured a story about Labour Culture Secretary Andy Burnham. During the sequence, Burnham was seen playing the guitar to seminal Undertones hit Teenage Kicks, accompanied by the band's once-talented singer Feargal Sharkey. "I realised that Burnham would have been playing the tune at the precise moment I had my strange experience in the graveyard," says Smith. Peel, considered quite rightly by many to have been the Greatest Man That Ever Lived, often said the song was in his opinion the finest ever recorded and played it during every one of his radio shows from the song's release in 1978 to his death in 2004.

"Mr. Smith contacted me by e-mail after he had seen me on television speaking about the tremors," Dr. Jenkins explains. "He told me all about what had happened and I put two and two together - the quakes were caused by John Peel turning in his grave. It's a classic case of the so-called Cool Vicar Syndrome, in which a desperately uncool figure attempts to be down with the kids, sometimes with devastating consequences."