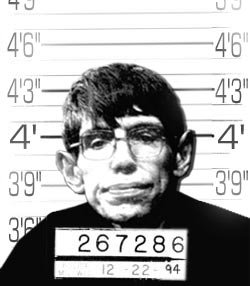 The author of Uncyclopedia's Stephen Hawking article lied, he was really arrested for roughing up a gay bar.

Stephen Hawking, noted cosmologist and inventor of the black hole, victim of "Hawking Radiation", and petrol station magnate, has applied his formidable intelligence in another area: dog butts. More specifically, a flavour which canines cannot resist, their own arses.

"It all started in that "Star Trek:Next Generation" episode I starred in, you know, the one where I clean out Lenin and Joe Walsh in a crap game. In the makeup chair, I got to thinking about why a dog might actually enjoy licking its own butt, and filed the thought away under "Money, Power, and Greed" in my infallible memory. The Pope gave it (infallible memory) to me for proving the existence of Satan... do you like it?", Hawking asked this reporter between bong hits.

Thrown off his game for a moment, this reporter hesitated, took a bong hit himself, then continued this interview.

Security would let our cameras only this close to Hawking's brain... and no closer.

Down at Boston Police Headquarters, while Professor Hawking was being booked for beating up 72 men at The Ramrod private mens club, he spoke at width on dogs, experiments, and his reputation as a "Mad Scientist". "You know," he said knowingly, "it wasn't my fault about those dogs. It didn't occur to me that lighting a fag in a room loaded with liquid hydrogen might be a bad idea, I was a little high at the time."

"Anyway, Oxford gave me this great chair, the one Isaac Newton had, and let me tell you, it buys a lot of good will. I had this surplus of graduate students, so as a practical joke, I had them research the question of why dogs lick their own anii. No one was more shocked than I to find it had panned out into a major cash cow!"

The fruits of Hawking's little joke have made him richer than Bill Gates. His wholesale dog-butt flavoured treats empire has won the hearts and minds of American and Canadian dogs, and will sweep across Great Britain and the Continent in two weeks.