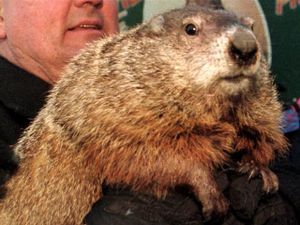 Punxsutawney Phil, shown here in better health in 2009. Hang in there, Phil. We're counting on you coming back in 2011.

PUNXSUTAWNEY, Pennsylvania - Irascible groundhog Punxsutawney Phil contracted H1N1 this year and was unable to perform his regular duties as annual winter weather harbinger today in Gobbler's Knob. In his stead, untested rookie Punxsutawney Pete stepped in, but failed to meet even the most basic groundhog standards, resulting in nationwide confusion and debate regarding the state of the national weather picture for the next six weeks.

"It was pitiful" said local observer Jake Tenible. "Dude pops out of his hole, right? So he sees his shadow. We were all, ohhhh, [expletive]. Six more weeks of this? But then, dude freezes. He forgets what he's supposed to do." It is unclear whether Pete forgot to retreat into his hole in fear of his shadow, or he simply was not frightened by it naturally, the way we are used to Phil doing year after year.

John Griffiths, a long-time handler of Punxsutawney Phil, expressed disappointment and resignation over the event. "Any time you are dealing with an untested replacement of a valuable asset, you have to anticipate the unexpected. Punxsutawney Pete has been through rigorous training, he knows the protocol, and he has the two plays down pat - in practice. It's a different thing altogether when you get out there on the knob for real. I guess Pete just couldn't hack it out there, poor guy. I can tell you that no one feels worse about this than that groundhog."

Consensus among the meteorological community is that the presence of the shadow alone should indicate the six more weeks of winter, and the actual expression of fear and subsequent retreat of the groundhog should probably be taken merely as a normal indicator, not a specific requirement. But without any precedent for the condition, it is difficult to say for certain.

Meanwhile, Punxsutawney Pete has been in meeting with Groundhog Day President Bill Deeley since the incident, and a press conference is scheduled for this evening at 6:00 pm EST. It is expected that his ouster is going to be announced. There is no word on a replacement for Pete, but up-and-comer Punxsutawney Pablo is expected to be a front-runner for the position. If so, he would be the first Hispanic groundhog to compete for the honor.