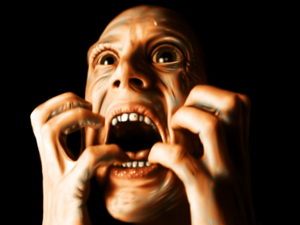 This average American is screaming in terror over all the horrifying things happening in his nation, despite having no worries of his own.

ROCHESTER, New York – Less than a week into the new year, several polls already indicate that Americans are frightened. According to a recent CNN/ORC Opinion Poll, over 50% of Americans reported being afraid that "some serious shit is about to go down," with an additional 25% saying, "America's going to Hell in a hand-basket!" Several people polled claim someone they know will soon be deceased. Many are also claiming that life is completely hopeless, and that you should just "kill yourself, and everyone around you."

Currently, the majority of Americans believe the economy is the number one problem plaguing the nation. Most claim it is getting worse despite the steady decline of first time jobless claims being filed, the increase in jobs created, the increased strength of the stock markets worldwide, and the strengthening of the US dollar against the Euro. One pollster noted very few believe their own economic situation to be in a bad or worsening condition. He also noted the apparent fear felt crosses party lines, but the indecisive, easily influenced independent voters seem to be the most scared.

Others, however, are scared by the 2010 healthcare reform, an insignificant military threat from North Korea, chlorine in their drinking water, the tax increases that President Obama wants to impose on billionaires such as Bill Gates and Warren Buffet, the increase in children diagnosed with autism, and their flight being snowed in during the cold, often snowy, winter season when the airports are filled to the brim by sub-human lifeforms that decided this is the only time of the year they should visit extended family.

"Look," said Fox News anchor Neil Cavuto on his less-than-stellar show Monday night, "the American people have the right to be scared, not just about the worsening economy, but about everything. The Democrats are imposing a death tax on your grandmother and have death panels where they are going to decide to kill her, too. This nation is being systematically destroyed by liberals." Cavuto later stated the only way to fix it was by removing every Democrat from the Congress and the White House and praying to God that the liberals on the Supreme Court would soon drop dead.

A caller to MSNBC anchor Ed Shultz's radio show earlier today was quoted as saying, "Dude, I love you, man. You're all like... Cool dude. You're a cool dude! I'd marry you if those damn conserva-tards didn't ban it. They're complete dicks, bro. They wanna take my medical marijuana from me, dude. I, like, need it man. I've got back pain. They're fuckin' evil, man. They're trying to keep me down! Fuck them!" Ed unequivocally agreed with the caller and said, "And they want to kill all the poor people! Hell, they want to kill Michael J. Fox by making stem cell research completely illegal! They HATE the first two Back to the Future movies and the first few seasons of Spin City! These right-wingers are evil!"

This apparent fear-mongering by the extremely biased media goes completely unnoticed by most Americans; however, some have adamantly spoken out against it. My neighbor Suzy, 7, says, "These people are idiots. They are clearly just trying to scare everybody to get across their political agenda. Most of them say stuff like 'think of our children and grandchildren' or 'do what is best for the youth of America', but they don't have my future in mind. If they actually did, they'd all step down and let us young people run the nation cause they aren't anything but old farty pants. It's like they are trying to make each other out to be the Devil, but my mommy says the only Devil is the priest who touched my brother."

William Harrison, a local 42 year old mechanic, may have put it best during a recent interview with UnNews in which he said, "People are fucking scared shitless, as they should be. For instance, let's just say I decided to put worn-out brakes on my ex-wife's car when she came down here for a routine oil change and tire rotation last week, you should be scared that her car will hit a Mack truck hauling hazardous biological waste near the public municipal water system. That's all I'm saying."