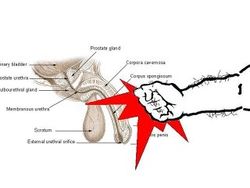 Cockpunching will not be featured. However, if you are interested, this is how you would do it.

NEW YORK, NY -- Today, Central Park Zoo in New York City announced that it would be abandoning the concept of the "petting zoo" and replacing it with a new "punching zoo," in which small children will be allowed to punch, and otherwise abuse, small animals.

The move will likely revolutionize the petting zoo business, which has been steadily declining in recent years. The CEO of central park zoo, T.J. Abram, explains, "Nobody really cared about petting zoos anymore. I mean, seriously, why would any child want to be gentle and loving to a small animal? That implies that human beings actually CARE about the natural world!" At this point, Abram laughed derisively. "I realized that, if petting zoos were to continue doing business in this world, we'd have to change our business model drastically. So I decided to reform our zoo so it was now based on recreational animal abuse!"

Abram's Punching Zoo offers a wide variety of animals for children to punch and kick, including cats, dogs, ducks, and lambs, along with some more exotic animals such as koalas and baby pandas. The punching zoo has already become extremely popular among tourists. "My sons just LOVE beating these animals senseless!" says one thrilled parent, "I'll be taking them here every weekend from now on!"

According to Abram, if his punching zoo continues to do good business, it will only be the beginning of a new franchise thematically based on introducing children to the joys of destroying the natural world.

"I plan to start a youth group, similar to Boy Scouts, but devoted to disrespecting nature. We could have group trips to beaches, but instead of picking up garbage, we'd LITTER! And the kids could have big Carcinogenic Chemical Cookouts, where they eat mercury-tainted fish and plants sprayed with pesticide. And the kids could go on volunteering trips to help poachers or illegal rainforest clearcutters."

But for now, Abram's business is limited to his popular punching zoo, where happy children are, at this very moment, passing time by bludgeoning animals and eating cotton candy.