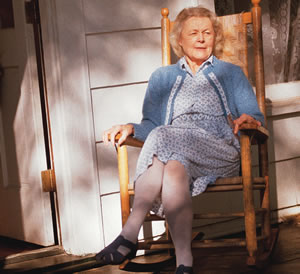 As seen here, Miss Swanson loved to party right up until her death on Tuesday.

CLEVELAND, OHIO -- Scientists at the The Mayo Clinic came to the conclusion that old people are more likely to die after the recent death of Bertha Madeline "Bobcat" Swanson, master gardener, beloved grandmother, and certified old person.

The study began three years ago, when five old people died at The Shadyside old folks home within the same week. At that point, The Mayo Clinic dropped their study on a miracle cure for cancer, and began a study on the elderly. "We were all so occupied with this old folks study, everything else seemed unimportant," said Lisa Garber, head of research Tuesday, "When I was at home, all I could think about was getting back to the lab and working. Now that it's all over, I don't know what I'll do. Maybe go home, take a nap, cry into a quart of ice cream... Er... I mean... Eat a nice dinner... Yeah, that's what I meant... Anyway, this was probably our biggest breakthrough since we figured out that bears actually do shit in the woods (who knew?), so I guess I can be happy about that. Although in hindsight, throwing a party might not have been the best thing to do, seeing as there was a death and all..."

The study in question consisted of the "old group" and three control groups (toddlers, young adults, and middle aged). The toddlers have yet to die, but the last person in the middle aged group was killed four days after Bertha, in a midlife crisis. When asked to comment, Lisa Garber merely said, "Let's just say his parachute had a hole in it..." Additionally, the last person in the young adult group, Jonathan White, nearly died after a head injury. However, after being admitted to the hospital, he did die of an accidental morphine overdose. One of our reporters was there, but was unfortunately out of the room at the time of death. The shady man standing next to Jonathan's body refused to comment. 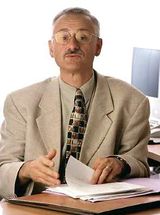 Mr. Martin seen here explaining to our reporter how Ms. Swanson actually died of being "too damn old", not of liver failure.

We asked Bill Martin, Senior Research Associate of The Mayo Clinic, to try to explain how they came to their astonishing conclusion, and this is what he said: "Ya see, we figure most people are born at a very early age (this is of course not true for people who are old for their age, they're completely different), and therefore must die at an old one. So what I'm basically trying to say is, old people are more likely to die, because they're older. See? It's actually very simple, really." His quote was also used in the newest editions of Science and No Shit, Sherlock! magazines.

Some have also called for a medicine of some sort to be created, to keep the elderly from death. But The Mayo Clinic has said they are going to work on smaller issues for now. "In order to make such a medicine we'd probably first need to find the fountain of youth", said Rob Golden, janitor for the clinic. "Also, I feel like alchemists have been working on it for thousands of years, so I guess it should be ready any day now. And besides, we've already put tens of dollars into this study, and I've needed some new Windex for like a month now, so I think we'll just wait it out and see if anybody else won't do it. We might start on the project at a later date, but certainly not until I get my windex." Golden refused to comment further, claiming that he had a three-fourteen in the downstairs men's bathroom.

The nurses at The Shadyside old folks home have decided to take special precautions to keep their residents safe from the grim reaper, such as changing curfew from five o'clock to four forty five, and adding three additional minutes to the daily "check your blood pressure" period of the day.

Featured Article  (read another featured article)
Featured version: 20 May 2011
This article has been featured on the front page. — You can nominate your favourite articles at Uncyclopedia:VFH.