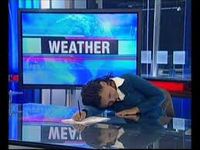 RUSSIAN EMBASSY, Washington D.C. -- This last Hump Day Night, something bizarre and mysterious happened at the Embassy on Wisconsin Ave. A man, later identified as 29-year-old Alexander Keith Adams, assaulted somebody at the Sunoco Gas Station and later tried to break into the Embassy. A host of law enforcement officials descended onto the scene: The Secret Service, CSI, NCIS, SVU, emergency medical pros, a cop, an Indian, a construction worker, a biker, a sailor, a cowboy, an Army guy, and an ambulance. It was all captured on video by filmmaker Ford Fischer and tweeted for all the world to see. Fischer even got ahold of the official police report. This is all big news. So it should be all over the news, right? Wrong.

The news media is strangely silent on the story, but we at UnNews finally got them to spit it out. It's one thing for Fox News to ignore this kind of story (what with it being true and all), but it's a different story for news organizations with a heavy liberal bias (like us).

That Emmy may very well go to Sam Nunberg for Best Actor for his epic meltdown on MSNBC's The Beat with Ari Melber.

"I'm too busy as it is," says Melber. "Trump and his shenanigans take up 90 percent of everybody's airtime. No wonder you UnNews guys can't keep up."

I explained to him that what makes it harder for us and UnNews is finding something to satirize. And if we can't do that, then we may decide to comment on an unavoidable serious story, which I try to avoid because it normally goes against the whole purpose of UnNews, which is to be funny. But then again, real life has been "the real joke" since the election. But that's another discussion.

Melber added, "I don't know what we'd do without that [Bill] Palmer guy."

I immediately pointed out that The Palmer Report was one of the few news outlets covering this Russian Embassy story.

"You have to Remember," says Carl Bernstein, "that [Bob] Woodward and I were the only ones bashing typewriters over Watergate until people finally gave a shit. So you gotta give Palmer a hell of a lot of credit." Bernstein continued "And you also have to remember that I horned my way into Woodward's story so in reality there was only one typing at all. I'm so greatful to Woodward and Nixon. They made an easy no-work life for me. God bless them both. And may I remind you that Woodward's the one who met with Deep Throat. Bastard didn't even tell me the guy was [FBI Number 2] Mark Felt."

The fact that one of the only news outlets reporting this is already fighting off fake news accusations on a daily basis (despite being proven left, I mean right, I mean correct, on each occasion so far) certainly doesn't help in giving this story validation.

"This is the worst possible time for a story like this to break," says MSNBC's Rachel Maddow. "Unless Mr. Adams was in possession of the Pee Tape or something huge like that, then we'll have to wait a while. If only Mr. Trump could stay out of the news for ONE DAY! ONE DAY is all I ask."

So, I guess it'll be at least a month before the mainstream media touches this story the way Trump touched Stormy.