From Uncyclopedia, the content-free encyclopedia
(Redirected from NCIS)
Jump to navigation Jump to search 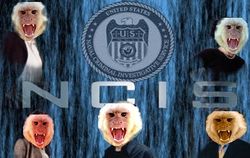 “You American's steal all your good ideas from us”

NCIS (Native Crimenal Investigation Service) was created by CBS when they realised that CSI was too scientific (read = expensive), the straight-forward cop show was too violent (read = expensive) and no one was watching JAG anymore (read = expensive). It concerns the various adventures of stern-yet-endearing former Marine and father-figure Leroy Jethro Gibbs and his team of sex/science-crazed yet siblingly team of miscreants that seem to have no friends or life outside of work, and yet still have things to talk about.

Because CBS was worried about all the navy-obsessed fans of JAG buggering off to other channels, Season One dealt with cases that actually concerned the Navy. However, once these fans had been safely harvested, CBS realised they could just go ahead like any other cop show and squash the occasional marine or dogtag into the odd case. They also realised something was needed to define them, so someone came up with actually revealing to the viewers the outcome of the case without all that tedious watching: before the episode starts, there is a sound like a duvet being hit and the screen shows a black and white image of some members of the NCIS team looking distressed or some poor sucker's mangled corpse. Episode continues normally until it reaches this point in time, and the greyness returns. Enter commercial break, unless you're watching in Britain or Australia, in which case this happens randomly and annoyingly in between breaks. After the break, the end of the next bit is revealed.

Episode begins with a grizzly murder. On discovery/occurence of this murder, the camera pans to Agent DiNozzo posing with an obnoxiously flashing camera. Other characters argue/pose/crack one-liners over the corpse. ME arrives and cracks a one-liner. Gibbs cracks a one-liner, and the intro sequence happens, featuring various shots of the characters running around in Washington waving their guns and raising their eyebrows at each other. There is a short turf-war with another agency (usually Tobias Fornell from the FBI, but it can also be with some random CIA spies.) Afterwards, Gibbs usually goes to autopsy and complains that Ducky the ME is taking too long cutting up dead guys. If Season Two, this will feature a reference to Ari Haswari, resident evil guy and arch-nemesis. If Season Four, ME's assistant Jimmy Palmer and Agent Lee will usually be having sex somewhere strange. Ducky will tell Gibbs things, and Gibbs will shimmer off upstairs to the NCIS lair, usually breaking up some childish argument between DiNozzo and McGee or DiNozzo and Kate/Ziva. Gibbs yells at DiNozzo to get back to work, and yells at McGee, who does things to his computer and finds a suspect. Some driving stunts, only to find suspect is gone. If season 3 to 5, Gibbs argues/flirts with the director (he only argues with the director of seasons 1 and 2 and threatens to shove the toothpick of Vance up his ass). He will always get his own way. DiNozzo (who is doing no work) finds some vital piece of evidence. Suspects are uncovered/spoken to. Case is seemingly hopeless. But then Abby calls up Gibbs and reveals some case-cracking piece of evidence which inevitably leads them to the wrong suspect. However, by this point Gibbs undoubtedly knows who the murder is. Some interrogating happens and his suspicions are proved. More driving stunts and some gun-waving. Somebody jumps on the suspect who whines a bit and confesses. Everybody sits in NCIS lair in evening and talk each other/eat Chinese food. Gibbs grins or cracks a one-liner. Enter credits. 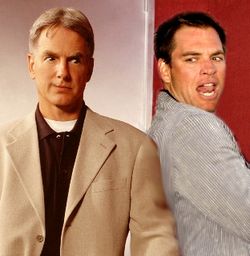 Father-figure. A marine. Was blown up in Season Three, and spent the Summer living as a bum in Mexico with a beard, which was later downsized to a moustache, which soon died due to popular demand. Has three ex-wives, one dead wife and one MIA girlfriend. Likes redheads, and round about season three started having flashbacks to his days of doing it in Paris with the director, also of his dead wife and daughter. Who died in a tragic banana boat accident

Older-brother-figure. An ex-Jock frat-boy who hero-worships Gibbs. Is hot. Isn't good at much so they let him take pictures at crime scenes, so he can just sit there and be hot. Despite this, he is the one who is usually kidnapped by evil, sadistic murderers who want to destroy his hotness. Won the purple heart in Season Five because some random guy broke his nose. Got an annoying girlfriend (French, but American-portrayed) in Season Four, who is unfortunately still alive somewhere, but we don't see her anymore, much to the relief of most fans. Theory is Ziva borrowed the director's bag of peas. Has allegedly bonked all female members of his team. Is head slapped in nearly every episode by Gibbs, he then head slaps McGee because he can. Is pregnant with McGee's child, or so he says. Is really Fornell's offspring. Loves to use insane ways to entertain himself. Wants to know everything personal about his teammates but gets pissed if someone finds out something about him. Accidentally made out with a guy in a bar, thinking it was a chick. Carried a bucket full of crap when he was a kid. Really loves movies and takes every chance he can to quote or relate an event to something from a movie, Just like you and your friends do! OMG That means you're cool like Dinozzo!

Sister-figure. The token girl. Used to be in the Secret Service but quit in first few episodes of NCIS because of her job career. Arch-nemesis Ari Haswari is so obsessed with her he proceeds to have an affair with her and then kills her at the end of Season Two. CBS planned to resurrect her halfway through Season Four, but Ziva devoured her to keep her job. She managed however to become awesome and dedicated her existence to prevent any other death in the Team.

Sister-figure, only there is speculation that she is in love with DiNozzo and has got it on with him multiple times. Completely sexy and gorgeous ninja chick. Desperately needs to get with DiNozzo before all the pent-up sexual tension between them implodes and eats them. Started getting possessive of DiNozzo in Season 5 and is a bitch to every woman he talks to. The token girl, and token jew. Too thin to be called butch, but the capacity is there. Nobody knows quite what she's doing here as she's not even American. She's supposed to 'liase' with Isreal, although this seemingly never happens. All that does is that she is set up by them for various grizzly murders. She fell in love with a man about to die in Season Four, and for several episodes afterwards went about wearing his ghastly fluorescent orange hat. The only thing she is good at is beating people up and talking about her butchness, so this is her job. Is really Solid Snake in disguise.

Resident noob and younger brother figure. Is a nerd who, miraculously, is a genius at both math and literature. Wrote a book featuring the NCIS team with different names. Naturally, this was a plotline in several episodes. McGee also got rich and bought a leather jacket, having previously dressed himself in an unvarying routine of beige suits not matching his trousers with diagonally-patterned ties. Shaved his head at one point. This made him look like a bouncer, and now he is trying to grow his hair like Tony. Had a mad crush on Abby, and even got a tattoo on his butt to a attract her. It worked and they had sex in a coffin. McGee has been on a "Jenny Craig" diet; it worked and he was finally thin enough to join NCIS.

Younger-sister figure and Gibbs' favorite. According to DiNozzo, she is a paradox wrapped in an oxymoron smothered in contradictions in terms. Sleeps in a coffin. Has a farting plushie hippo called Bert. Is a lab-tech and talks to her machines. Has several stalkers. Had sex in a coffin with McGee, and is suspected to be a vampire. ODs on caffeine daily,

The mother figure in series 3,4,5. Jenny was the first director that we got to see on a regular bases. Jenny Sheperd like Gibbs doesn't speak of her past much mainly because of Gibbs giving her brain damage in Paris after fucking her brains out. Jenny dies at the end of series 5 (thank god). I have a question to ask you-was she doing Gibbs or Tony?

Scottish. Grandfather-figure. Scottish. Has insane British mother who says british things and has British corgi dogs. Scottish. Went to a scottish school in Scotland, drives a British car and is tres cultured. Scottish. Had a fling with Gibbs in France where they were mean to les flics. Did I mention he was scottish? "Ducky" has also in many situations been caught doing necrophilia.

The FBI agent. Dad's old-pal figure. There are no other FBI agents unless they are his minions. Married one of Gibbs's ex-wives and subsequently hanged himself but was resurrected due to being King FBI agent and CBS not wanting to invent a new one (read = expensive). He also has a thing for flipping elevator switches.

Ducky's nerdy assistant who can't read maps. Nerdy-kid-next-door figure. Has constant and unlikely sex with Agent Lee throughout Season Four. Devoured the previous ME's assistant to get the job.

Ex-ME's assistant. Had a steamy relationship with his iPod, who cheated on him with Ducky. Broken-hearted, Gerald was shot by Ari Haswari and was replaced by Jimmy Palmer while whining in hospital. When it looked like he was healing, Palmer ate him to ensure he couldn't return to work. Cousin-figure.

A girl. Had a thing with DiNozzo. Exploded in Season Four.

Darth Vader: the early years. So obsessed with Kate he had to kill her. Likes annoying people. Ziva's half-brother; she shot him in season three to save Gibbs

Stepped up to the challenge of being arch-nemesis in Season Four. Tony's girlfriend's dad. Pops it in Season Five. His name is woefully mispronounced. His wife left him after he tried to eat her. This is normal in frogs. Was mercilessly murdered by the director.

Bitch. La Grenouille's spawn. Bitch. Tony's girlfriend in Season Four. They break up when she tries to eat him. Used as an insult on DiNozzo when he gets even more annoying than usual. Ziva David should have eaten her.

Not really a person, but an important place in the show. Often people must share feelings, top secret information, or impromptu hugging sessions and this CANNOT be done outside of the base or in a secured location so Gibbs stops the elevator and procedes to use the quiet personal box for quiet personal time. See Also "Under the stairs."

Itself launched by JAG, NCIS has in turn launched NCIS: Los Angeles, NCIS: Las Vegas, NCIS: New York, NCIS: Puerto Rico, NCIS: Royal Naval Patrol NCIS: People's Republic of China, and NCIS: Guam. Each new spinoff's pilot has the new characters investigate the lead character of the old show for murder. None of course, that are as popular as the original, but used as sparse money-makers, as the ratings go up higher than their average of 80 whenever they feature an original NCIS character that has obviously been bribed or blackmailed.