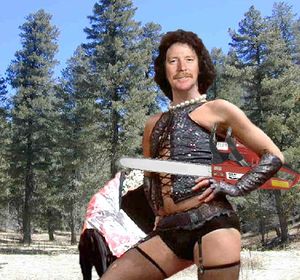 Lumberjacking - not a very good job, according to Bruce (pictured).

USA -- The lumberjack, working hard in the majestic forest, is one of the most enduring icons of popular American culture leading generations of little boys - and some little girls too - to grow up claiming that this is what they want to do as an occupation. Perhaps it is man's triumph over nature that appeals, or maybe it's just the concept of working in the great and glorious outdoors. Whatever it is, many of us could be forgiven for thinking it must be a great way to make a living and perhaps even dreaming of jacking in our boring office jobs and heading out into the wooded mountains with our trusty chainsaw to carry out a good, honest day of real man's work.

However, a study carried out by JobsRated.com recently has revealed that - shockingly - very few lumberjacks are happy with their lot. In fact, so many of them hate their job that it is now officially the worst job in America, beating out "public sanitation worker", "CEO of AIG", and "President of the United States". Our reporter took the UnNews staff Beechcraft to the Great Smokey Mountains forest on the Tennessee-North Carolina border where he met up with Bruce, a lumberjack for ten years. We asked him first if there any good sides to being a lumberjack. "Hey, y'know, I ain't gonna say it's all bad," he told us. "I mean, I get breaks to eat my lunch and go to the lavatory plus every Wednesday I get the day off to go shopping, when I buy butter and scones for my tea. I've been interested in botany for a long time and my work takes me up into the forest which is a great place to find plants that you just don't see elsewhere - I like to press wild flowers."

It seems that many lumberjacks are put off by the high numbers of accidental deaths - a rate of 82.1 per 100,000 makes it the third most dangerous profession in the USA. They're also required to work outdoors all year round: "Yeah, it's great out there in the summer," says Bruce, "But I wouldn't wish anyone to have to go out and cut down trees when it's blowin' a gale and snowin'." This creates a highly stressful environment, which isn't helped by the long hours and extremely strenuos, physical work involved. The pay is low too - Bruce started out on minimum wage and now earns just $13.80 a hour, which he feels is unfair in view of the hardships he endures.

All of these pale into insignificance when compared to the uniforms which many logging companies now require employees to wear. "My grandaddy, he was a lumberjack too," Bruce moans. "Back in his day, lumberjacks dressed in the way that everyone expects them to - he wore stout boots, jeans and a padded checkered shirt. Good, solid, practical gear for anyone working hard in the forest, in other words. But then during my dear Papa's day - he was a lumberjack too - someone somewhere decided that had gotta change. Nowadays, us guys are out there cutting down trees while wearing high heels, suspenders and bras. It's embarrassing. Mind you, it does save me time in the evening - I no longer have to go home to get changed before I go and hang around in bars in the evening."