UnNews:Korans may have been burned today 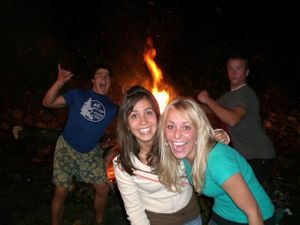 Young evangelical Christians cavort around a large pile of burning Korans. Or maybe just logs and brush. We aren't saying.

WIKIA CITY, California -- Copies of the Koran may have been burned today at the Dove World Outreach Center in Gainesville, Florida. We just don't know. More precisely, we know perfectly well, but we're not telling, as a service to the world.

UnNews has followed the lead of the Associated Press, which yesterday directed its affiliates "not to cover" the "Burn a Koran Day" of Pastor Terry Jones, or at least refrain from distributing fiery, live footage guaranteed to attract large, worldwide audiences of angry Muslims and enthused Christians. "Along with the wire services, we've taken the high road," said UnNews Publisher Morris Greeley. "And we don't mind if the world knows it."

The evangelical church, with a congregation of 50, reached the national spotlight when the call to burn Korans brought out President Obama and much of the Cabinet with a condemnation, and General Petraeus said the demonstration might lead to greater violence in Afghanistan. The prompt and clear expression of opinion contrasts with the relative silence when an even smaller number of evangelicals burned the World Trade Center in 2001. On the right, Constitutionalist Pat Buchanan called for the arrest of Rev. Jones, on charges to be invented later, and Rush Limbaugh noted that he opposed Rev. Jones, in the Cape Girardeau, Missouri Little League, fifty years ago, "before it became fashionable to do so."

The pastor of the mini-congregation made his protest contingent on promises to move the proposed Ground Zero Mosque, and reported yesterday that he had received assurances to that effect from an "Iman," assurances that Muslim imams later denied. Iman is Spanish for "magnet," which may explain the reason the message didn't get through. It is also the name of a super-model, whom UnNews is trying to reach for comment--which, in the name of world peace, we won't report either.