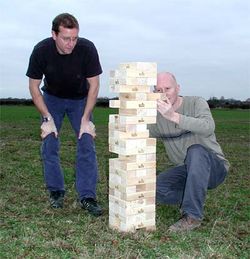 The mystery man in a photo taken a year prior to the stunts. Can you believe him? He's removing a block from a row that already only has two left! The madman!

NEW YORK, NY - There it was. A local man, about 29 in age, was really drunk, and according to bystanders, doing some pretty crazy stunts. Other reporters say that he also might have been on crack, but no conclusive evidence has been provided to support that end. Despite being really drunk, possibly cracked, and getting crazy, the man managed to survive this big day despite his suicidal behavior.

The policemen were unable to find out where this man obtained such large amounts of Crazy; theorists speculate someone smuggled several Crazy Pills into at least one of the copious amounts of beer cans the man ingested[1], but others believe his craziness is inborn. The latter theory is supported by the accompanying photo, recently released by the Associated Press.

The man's first so-called "stunt" was apparently firing himself out of a canon into Mars. Scientists all shook their heads in disapproval, dismissing the stunt as impossible.

"It's a well known fact that canons cannot project a person as far as Mars," said one of the nation's leading scientists. "Of course, in 1973, Louis Armstrong managed to fire himself to the moon and back using a juiced up version of Canon in D, but Mars? Impossible!" The mysterious, drunken man defied all scientific expectations by wrapping himself around Sergei Rachmaninoff's 600 page long Canon del Oscfica and successfully passed the Van Allen belt, going straight to Mars. Unfortunately, the man hit his head right on the surface of the planet and bounced back to Earth untriumphantly, creating a comically-shaped-like-a-human hole in the ground a full twenty feet deep.

Despite this moment of weakness, the cops were unable to apprehend the man. "That crazy bastard! That crazy bastard!" commented one cop. Warner Brothers decided they should get all they could get to catch this man, and are reportedly acquiring weapons-grade materials from Acme Roadrunner Catching Co. The man, who shall here on be referred to as Mr. Doe, dropped a ray of Golden Sun on the police and sped off on foot to Ass, Italy. Caught by surprise by the hail of Game Boy cartridges flying towards them, Mr. Doe gained a sizable head start.

Mr. Doe was going to jump the Ass Tower. Yep, that's a whole twenty stories from the sky[2]. Cops think that this would be suicidal. Well, it's really just common knowledge. However, the Ass City Council couldn't risk having a twenty-foot-deep-comically-shaped-like-a-human hole-in-the-ground on their land[3], and forced the police to reason with the man. Doe would not listen, and the cops didn't hesitate in calling it a day.

"The cops could not go fight [sic]. They were to [sic] pussy [sic] to fight him," remarked one bystander in mangled English. The situation spun out of control, and the man jumped! There was no way of stopping him now as he fell and fell, he was just having too much of a good time. He just didn't want to stop at all.

Defying all expectations of the observers, the man concluded this downward voyage by reaching the ground. Instead of making a hole, he ran all the way to New York, even further confusing his pursuers. 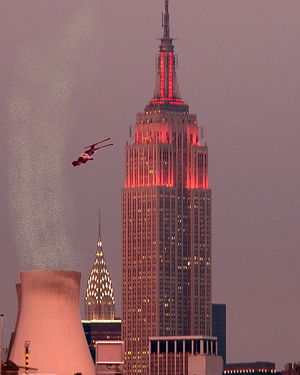 By the time he ran across the Atlantic Ocean and arrived in New York, he grabbed his skiing boots and headed straight for the Empire State Building, intent on making it his personal black diamond.

Yes, he was going to ski down the Empire State Building right into the smelly and shitty sewer beneath. The police, having lost interest in the man, were largely apathetic, and decided such an end to the man was justified. Despite the NYPD's apathy, Mr. Doe delivered a firm "GO FUCK YOURSELFS [sic]!" and launched himself right at the green-tinted abyss below. But there was a mistake! He didn't expect a sudden gust of wind to hit him as he fell, and he went right into the power plant![4]

No one was quite sure of what happened in the hysteria that followed, but the man disappeared without a trace and the power plant abruptly exploded in a whiff of green dust, leaving the NYPD and SWAT perplexed.

"I can't believe we loat [sic] him. We had him right there on top of the Empire State Bulding and... and... where the fuck did that power plant come from‽" said police chief Randall Osgood with a mouth full of doughnuts. Added Randall with his best puppy dog face: "And did he really need to say 'Go fuck yourselfs? That hurt my feelings, man. That's just so... low."

The police gave up on the search, but a week following the incidents an anonymous tip claiming to be a former student of the perpetrator provided the location and identity of the John Doe. It turned out that the mystery man was one Francis Winkler, who was recently admitted to a mental hospital for a case of getting some mental sickness. Winkler escaped when someone swapped his medication with Crazy Pills, leading to his transcontinental rampage.

He was apprehended on the loo, in the midst of what was reported to be Number Two. In an unprecedented act of mercy, judge Washington Irving sentenced Winkler to a mere 8 hours in jail just to chill the fuck out. There are, of course, no actual laws against shooting yourself to Mars or skiing down the Empire State building, and international red tape prevented Winkler from being convicted of his misconduct on the Italian Ass Tower. In fact, the only crimes the man was indicted for were accidental human-shaped-hole-in-the-ground formation and civil disturbance.

Released 5 minutes ago, Winkler says that he's learned a very valuable lesson about the dangers of beer, and from now on only drinks Kool-Aid. The sugar-heavy beverage, as opposed to alcohol, has apparently given Francis a calmer lease on life. "I Learnd [sic] A Big Lesson; Beers Suck, Get Kool-aid. I Need To Get My Fix Of Kool-aid Every Day. After All, I Am A Drunky [sic]."