This game is not to be confused with our Sun 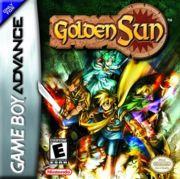 The totally original packaging of Golden Sun, which is completely unlike any other Game Boy RPGs.

Golden Sun (originally released in Japan under the title Ōgon no Daiben: Hirakareshi Fūhatsu (黄金の大便 開かれし風発), meaning Mornington Crescent: London Underground Superfun) is an RPG created by Camel Software Planning, and it has been likened to Captain Planet and the Planeteers. Golden Sun is the first in a, so far, trilogy of games entitled the "Solar Objects made of a Valuable Metal" Trilogy. The second and third games in the trilogy are, respectively, Golden Sun: Now with a Boat, and Golden Sun: Reviving the Series After 5 Years Because the Handheld Market is Starting to Flatten Out in Profit Margin Potential and We're Hoping to Get Fanboys Who Have Not Yet Bought a DS to Buy One so We Can Make More Money(Golden Sun DS, for short)

The game starts with your main character, Crono Isaac being forced out of bed because his town is being evacuated from a toxic smog being unleashed from Sol Nuclear Power Plant. Several minutes of trying to find paths around boulders later, he and his friend Fighter Garet find out who triggered the meltdown: two unscrupulous nuclear physicists named Sephiroth Saturos and Gundam Deathscythe Menardi. Since the two physicists are intent on not getting caught, they promptly wallop the shit out of the two kids.

A few years later, Isaac and Garet decide to investigate the remains of the power plant with Cid their teacher Kraden and Isaac's girl Aeris Jenna. Once inside, they find some portable nuclear reactor cores that power some far-off generators of untold amounts of energy. Surprise surprise, the two physicists from before, as well as an old childhood friend named Zero Felix and some blue-haired teleporting fellow named Ian McKellan Alex have heard of them too, and ambush the good guys at just that time. Also unsurprisingly, the reactor cores are hooked up to the main generator of Sol Nuclear Power Station. Hilarity ensues.

Once the bad guys capture Kraden, Jenna, and the cores, Isaac and Garet are left for dead. They are rescued, however, by Bahamut The Wise One, a cycloptic floating rock of infinite plot advancement. In exchange for giving them (and two other people at an undetermined time later) elemental powers, they have to go get the nuclear reactor cores back and stop a world-wide Chernobyl.

Needless to say, this sort of thing has never been thought of before, and the new, fresh plot instantly hooked gamers.

The game circles primarily around your elemental powers, or Psynergy, which is in no way psychic energy. Each character can obtain one of the four elemental powers for their own use (sans Heart) and also gain more through other means. While these things can be used outside of battle, there are other tools at your disposal during combat as well.

A normal weapon swing. However, they did incorporate special items called artifacts into the game. These weapons do not have a normal attack, but instead a weapon unleash, which is a special effect that has some trippy animation. Since it doesn't let you use any other abilities aside from the ones bound to the weapons, most artifacts are therefore quickly discarded, except for the super-powerful ones. Watching a little animated man scream: "MEGIDDO!" is fairly amusing. However, as most artifacts have rather crappy effects, they should be left alone, unless they end up being cursed, in which case they weld themselves to your body. Ouch.

The elemental powers of the game, which every character has. These can change depending on equipped Djinn. They fall into four elements: brown, red, blue, and white. The Heart element does not get used in this game, and as it is the element that binds them all together, you can generally have only one element per character at any given time. This seems to suit people just fine, though, since each character has one element, leaving your party with no weaknesses.

Small Pokemon things that can do varying effects. These also have only four elements, but the wide array of attacks they can use more than makes up for it. There are almost no drawbacks for using these critters in combat, and it is considered common to fight even Vermin with these at all times. If you don't use them for at least ten battles, you can use the next command. They are also bloody hard to catch. The only way to catch them is to put your Catalytic converter into overdrive, and run after the bloody things.

Again, never been done before. This power lets you use Djinn on standby to call up various beasties to do your bidding. Since the Heart power isn't present, you can still only use single element summons, such as Thor, god of thunder, or Boreas, the snow-cone machine from Hell. This problem was fixed to a slight degree in Golden Sun 2, when Kraden (unknowingly possessing the Heart element) could read stone tablets to grant other summons, like the ridiculously unbalanced Zagan summon.

Unlike any other RPG, the items in Golden Sun actually maintain some use. These range from the many powerful healing items (the only way to recover health in the game) to the charge items that have a random amount of uses before they break. The amazing level of power that these items held with almost no repercussions was instantly praised for its ingenuity.

Once you finish the game, you can enter in the Konami Code to prepare a transfer of your levels, Djinn, gold, money, insurance, admin status, Eye of the Aetheopica, pants, and whetever else you can think of, either with an archaic game link, or a password 15 pages long, to the sequel, which has almost no practical value in the game except in the sailing minigame, which becomes obsolete once you learn Hover anyhow. 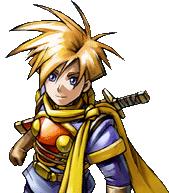 The party in Golden Sun consists of several characters, which have widely been hailed as "freakin' awesome":