VALLEY OF ELAH, Socoh, Israel -- The newly founded kingdom of Israel was dealt a crushing blow today when the Philistine giant Goliath destroyed patriotic Israelite David in a winner-take-all battle in a valley that has been collquially known as the "Super Bowl." The one-on-one battle was the result of an ill-advised tactic employed by coach Saul Bellichek, wherein the outcome of the epic battle between the Philistines and the Israelites (also known as "Jews") would be decided by a single bare-knuckle brawl. "I thought it would turn out like Thunderdome," said a crushed Saul, whose perfect record of war campaigns was shattered by this loss. 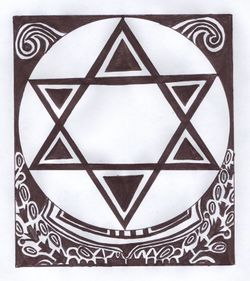 Logo of the Israelites, former champions

Goliath, a giant whose height is given as six cubits and a span (9'6"), reportedly approached Saul with the idea when he decided that he wanted to outshine his brother Golgath. Golgath had recently launched a successful merchandising company, and had become the apple of his parents' eye. In this interest, and perhaps due to his huge stature, he felt confident that he could defeat anyone who was thrown at him.

David, weighing in at a petit 5'0" (barely making him a non-Little Person), decided that he could outsmart the giant in battle. Taking only a slingshot into the Super Bowl, the battle commenced. His motivation was intense nationalism; his last known words were, "My ankle hurts, but no one messes with Israel!" Perhaps that hurt ankle dealt him the final blow of death, for, as you already know, only one person emerged from the Super Bowl. And it was exactly who you would have expected.

David first shot rocks at Goliath with his slingshot, shots which the Giant brushed off nonchalantly. Then Goliath broke David's neck. The end.

Apparently, though, this has far-reaching effects for the Israelites. "The death of the Patriot will always be remembered as a black day in Israel's history," said Saul, who then went on to distraughtly offer sacrifices to the Philistine god Baal. The manager of the Israelites, Yahweh (or God), was disappointed by this, saying that because of Saul's actions (and David's loss), the Israelites will be disbanded sometime in the future, as "[he] isn't going to deal with this shit anymore." Furthermore, defense coach Samuel Somethingorother said "woe to thee who is not me," and that the Israelites were now "screwed."

Apparently Samuel's first words aren't true: reportedly, Goliath and Golgath are basking on a Floridian beach until the next Super Bowl.