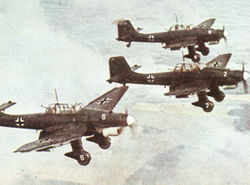 The first wave of German aid workers are already flying into Poland. Polish residents flee for their lives, with fear of imminent invasion

EUROPE, near Africa -- Following the aircraft crash that killed virtually the entire political and military establishment of Poland yesterday, neighbouring Germany has offered to help the ex-communist nation during its hour of need by taking responsibility for the Polish government, army, legal system and administrative structure.

The crash, which has been hailed by many as proof that flying around in aging ex-Soviet Tupolevs is an unwise activity, claimed the lives of 97 people including President Lech Kaczynski. His death, while deemed tragic by other world leaders, is being celebrated by homosexuals throughout Poland and anyone who feels that a "traditionalist Catholic" right-wing government might be a bit repressive.

Poland has faced many problems since the communist regime established shortly after World War 2 came to an end, many of them ongoing. This has led international observers to raise concerns suggesting that the loss of its leaders means that the country now faces its biggest crisis in recent history. Germany has been the first to offer help and has created a special task force of aid workers led by Walther von Brauchitsch will move into Poland later today, bringing several tons of supplies to sustain themselves during their stay so as not to place an undue strain on the fragile Polish economy. One of the major problems facing Poland is the fear caused by the Tourism industry. Several laws have been implemented to avoid chaos. One of them being that no more than 10 foreigners can travel together as a pack. Regardless, the Country is suffering a cultural and financial disaster by implementing those. 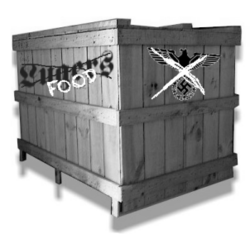 Several thousand crates similar to this one, are stacked on the runway at Berlin Airport ready for transportation.

However, no matter how well-intentioned, German aid is not universally welcome among Poles - Germany has, after all, an unenviable reputation when it comes to reorganising the governments of European nations. General von Brauchitsch is quick to deal with Polish worries. "Ve vill begin vith a team of Schützen vorkers who vill move around der country ensuring dat all Poles ünderstand vot it is ve are trying to achieve und dat ve are zer to invade...Gott in Himmel, I mean aid them," he explains. "Those that vork vith us vill be amply rewarded, those that are ünvilling vill be...persuaded. Ve vill also deal vith any ündesirable elements vhich might vant to take advantage of der sitüation and turn it to zer own advantage."

Germany's task will be made far easier due to the fact that much of the infrastructure put into place during its previous Polish projects, dating from the 1940s, remains in place and can be made operational at short notice. A Polish government spokesman, Krzysztof Grzybkiewicz-Bezwzględny, claimed that many installations had been mothballed by Kaczynski's government for future use, including a number of internment facilities that can be used to incarcerate those suspected of profiting from Poland's crisis and other people deemed to have committed criminal acts by the Polish government and German aid teams. "Kaczynski's Prawo i Sprawiedliwosc party had made sure much of what the Germans left behind could be reused at some time in the future, just as soon as the European Conservatives and Reformists group of which they were part achieved dominance in the European Parliament," he told UnNews in an exclusive interview. "Once that had been accomplished, they planned with their EU colleagues to create a Europe-wide political entity which would address many of the problems facing the continent."

France, Norway, Finland, the Benelux countries, Greece, a large chunk of North Africa and all nations in Eastern Europe are believed to have grounded their Tupolev fleets as a precautionary measure.